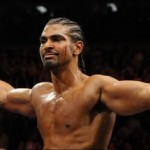 Adam Booth, David Haye's manager, confirmed that he has spoken to Audley Harrison's representatives about the possibility of an all-British heavyweight showdown later this year, but insists that no contract discussions have taken place. Booth emphasized that Harrison is one of six possible opponents for Haye, who in his last fight stopped a game John Ruiz in nine … END_OF_DOCUMENT_TOKEN_TO_BE_REPLACED