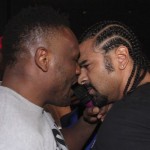 The Daily Star is reporting that Dereck Chisora faces possible disciplinary measures following his actions last weekend, which culminated in a brawl with David Haye at the press conference following his spirited losing effort to WBC heavyweight champion, Vitali Klitschko. Chisora was detained and questioned by Munich police after the brawl, and was released without charges … END_OF_DOCUMENT_TOKEN_TO_BE_REPLACED