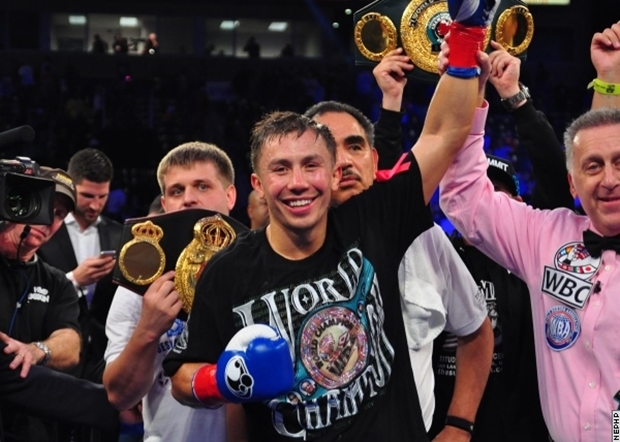 “Ever get the feeling you’ve been cheated? Good night!”
— Johnny Rotten, 1978, Winterland Theater, San Francisco, California, after an abbreviated set at the end of the last Sex Pistols concert on the group’s infamous U.S. Tour.

Under normal circumstances, a two-round main event laugher where the fall guy goes down like a sack of laundry at the first real contact made would illicit a near riot at a sold-out arena.

But we saw an exception to that rule Saturday night when Gennady Gennadyevich Golovkin stood victorious over fall guy Marco Antonio Rubio in front of a sold-out StubHub Center in Carson, California

Rubio, who rubbed the top of his head as if recovering from a noogie and smiled before shrugging off the loss, emerged as a secret winner in all of this. He came in overweight, opted not to try and lose the excess poundage, and wound up walking away with a $350,000 payday while avoiding the bloody, GGG scrapbook beating he had been hired to take.

“He hit me hard, but it’s not the hardest I’ve been hit,” Rubio said after the quick exit. “I came to fight, to put on a good show. I got up, but the referee decided to stop it.”

It was an appropriately sardonic response from a smart man booked into an intellectually dishonest, exploitative, cynical showcase for the “other guy.” Maybe Rubio could’ve continued, maybe not, but it sure made sense for him not to get up until the count of 10-and-a-half.

But nothing Rubio did, before or after the bout, would matter as this sham of a title fight was always about feeding the keenly cultivated cult of personality around “Triple G,” the emerging star.

Few fighters get the free pass that Gennady Golovkin has gotten for the last several years– twelve fights into a world title reign with only Daniel Geale to show for it. The affable Kazakhstan native gets the free pass on a woeful overall level of competition because he is, basically, the living embodiment of fight fans’ greatest macho boxing fantasies.

He’s the smiling assassin with the flawlessly efficient offense. He only exists to kick ass and scare all the sissy millionaire champions into hiding. Golovkin is what boxing would be if written and cast by adolescent boys– or, frustrated middle-aged boxing scribes with waning testosterone levels.

Golovkin’s free pass is due in great part to a media that is not shy in showing their absolute fawning adulation of the man. Article after article would emerge during this past fight week, almost all talking about Golovkin’s unstoppable star power and giving reason after reason why the undefeated middleweight will, soon, take over the world.

By the time Golovkin and his team would actually hit the ring at the StubHub center, the West Coast press corps was bursting with anticipatory glee. It was a press row so enamored with the macho fantasy of Triple G that it should’ve been stocked with wet-naps and equipped with a plexiglass fap guard.

Nothing short of an impossible Rubio upset victory or a terrorist attack could’ve kept the “Golovkin is God” fight recaps from being written.

These days, even the smartest fans and most astute of media voices seem helpless in the calculated fervor. HBO and Team Golovkin talking points are repeated verbatim by those who would otherwise know better. Golovkin has fought tailor-made stiffs for the vast majority of his career because everyone is afraid to fight him. Who else is left to fight? He can only do battle with like-minded warriors.

Leaps of faith are taken by the true believers. With no insider knowledge of any behind-the-scenes efforts to wrangle opposition, the buzz is believed– even by those usually smart enough to reject hand-placed boardroom info “leaked” to the media.

Forget that HBO has been low-balling Golovkin’s purses since the very beginning, only allocating a total purse of $1.35 million for their emerging superstar’s last two bouts. Forget that Golovkin had to peel off 200K from his own take in order to prevent Daniel Geale from walking away from an absurdly firm $400,000 HBO offer or forget that, except for Geale, the most paid to a Golovkin opponent has been the $450K given to Rubio (minus the 100K for missing weight).

Forget all of that. Look at Triple G punch…Punch, Punch, Punch. And he’s so humble. A real warrior! And whose heart didn’t melt a little when he spoke some Spanish during his post-fight interview?

HBO, with the low-investment, high-return Triple G business flourishing, should be feeling no pressure to change anything. Why dish out fair market value for a high-end opponent when the fans and media are perfectly fine with tailor-made, mid-level opposition at a bargain basement cost? And if they “can’t” find a big name opponent, of course, they also can’t pay Golovkin the big money, either. This game can go on forever. But, again, everyone seems fine with it, so maybe it’s a non-issue.

So much in the boxing business is subjective– from who gets the fan and media love, right down to the actual scoring of the fights. The sport will forever be about perception just as much as reality.

And right now, the perception is that Golovkin can do no wrong. Speak the opposite and fear the angry wrath of true believers.

This is by no means an effort to cast aspersions on Golovkin and his talents. The man looks to be “for real” and is legitimately one of the most talented offensive fighters in the game. Competitively, he’s probably the best in a recently-imploded middleweight division and could reign for a long time, given his ability and the natural charm that has allowed for a brilliant, thus far relatively risk-free pro-GGG marketing campaign.

The problem is that, maybe, fans should be a little critical about this Golovkin hard-sell. Maybe if the hard-charging Kazakh weren’t held to a different standard than other fighters, he’d have already been tested– not necessarily by the prior top dogs of the division, but by fighters with styles and abilities not completely hand-selected to make him look unbeatable. If the fans and media didn’t completely buy into the myth, HBO, as well as Team Golovkin, would be under greater pressure to spend some money and come up with opposition not set up for bloody, brutal failure.

As it is, what we’ve seen so far of the multi-talented battler amounts to little more than one long series of showcase set-ups designed to build his brand. For a young prospect looking to establish a name for himself, these matchmaking fixes are to be expected– but not for a world champ twelve fights into his reign, headlining sold-out cards on HBO.

Fans should be mad that they were sold a mismatch on Saturday night and somehow convinced to be excited about it.  The willingness to suspend disbelief and critical thought for a rush of testosterone-tinged adrenaline says a lot about why fans rarely get what they want from the sport.

Instead of outrage and frustration, fans are eager for another fix. And, of course, to the business brains behind Triple G’s brawn, that means more of the same until fans realize that the bandwagon ride they’ve hopped upon is really just going in circles.