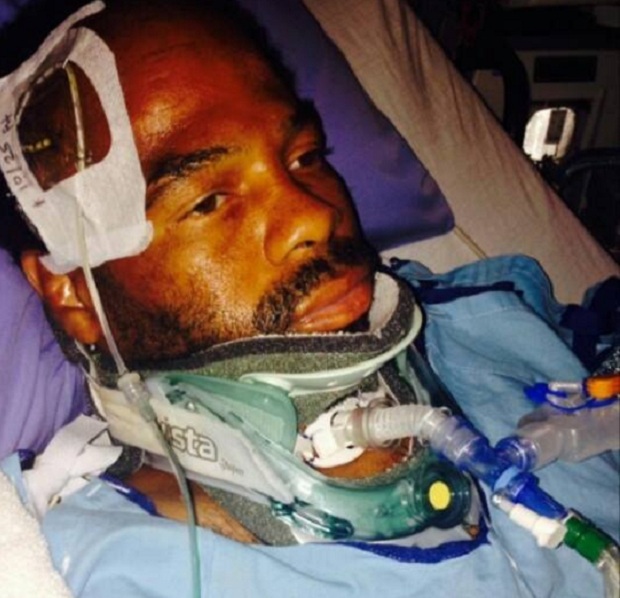 After seventeen years as a professional boxer, Emanuel Augustus came home to Baton Rouge at 37 years of age without a suitcase or driver’s license and with few possessions to speak of. Two years later, he lies in critical condition on life support, with a gunshot to the back of his head.

According to unverified reports on social media, lent credence by an accompanying hospital room photo of the fighter (used in this article), Augustus is now somewhat responsive and, although he can’t speak, he has been able to move his legs and right hand. Hopefully, this is a sign of good things ahead.

At any rate, there is a story to tell in the boxing life of Augustus– one which goes beyond fighting and the spectacle of the sport.

In 1998, Augustus fought in Denmark, Louisiana, and the United Kingdom…Not over the course of a year, but in a 22-day span.

In Denmark, he fought well-regarded hometown hero, Soren Sondergaard to a draw. Eight days later he was in New Orleans, Louisiana, knocking out club fighter, Eduardo Martinez. Then, back on the plane and over to the UK ten days after that to take on tough John Thaxton in a KO 7 win for IBF/WBO Inter-Continental titles.

Forget his seven other fights that same year (in 6 different cities, 4 different states with 1 contest in Germany), that 22-day span, alone, would be enough to run any fighter into the ground. The fact that Augustus managed a 2-0-1 record in those three contests is a testament to how good Augustus was and it provides proof as to just how good he could’ve been.

Anyone with even a marginally trained eye could see the flashes of brilliance in Augustus, even in his war-ravaged later years and even in losing efforts against young, hungry, fresh prospects.

Educated hands, smart movement and fluid punch selection…It was still on display in brief glimpses up until the very end of his career, but you could also see the life force being squeezed from this talented fighter. In the last years of his career, Augustus was fighting on smarts and instincts alone and he had still managed to be somewhat competitive with hotshot prospects and fringe contenders, but then he started to take some serious punishment.

His penultimate fight, a September 2010 loss to a protected and marginally well-regarded 13-0 prospect, Charles Hatley, was further evidence of a real and noticeable decline in both punch resistance and overall reflexes as Augustus was sent to the canvas twice in the eight-rounder. Prior to that, he suffered a real physical beating against undefeated Russian prospect, Ruslan Provodnikov, getting dropped three times in the nine round TKO loss.

In the past, Augustus could show up ill-prepared and ill-rested and still give the undefeated hometown hero a major battle. In the latter days, lesser fighters were starting to cause some serious damage to boxing’s “Drunken Master” and the end was clearly in sight for a fighter gifted with world class ability and reflexes, but also world class character flaws.

At 38-34-6 (20 KOs), Augustus will not be getting into the Hall of Fame anytime soon, but the record alone doesn’t begin to tell the story of a fighter who, under the right circumstances and in a sport that actually conducted itself as a sport, could’ve been so much more.

Emanuel Augustus had always been his own worst enemy, especially as a participant in the cruelest sport of all. By jumping from manager to manager, listening to none and always drifting off to do his own thing in the end, he facilitated the mad dash to use and abuse his talents. Often on short notice and nearly always in the backyard of his opponent, Augustus fights were frequently controversial and almost always entertaining battles as he’d alternate his ring style between true, brawling grit and master showmanship.

When he felt good, we’d get the juking and jiving Drunken Master, bouncing and twisting like a marionette tied to a ceiling fan; When he felt mean, he’d go toe to toe with his rival, rifling off five and six shots at a time and daring his rival to fire back.

But without any sort of guidance (or desire to be guided), Augustus’ world-class talents were raffled off to the highest bidder, forcing him into situations where the young prospects he was up against would pull out the win regardless of what actually happened in the ring.

Some would say that, easily, a quarter of the losses on his record could be overturned on review and more than a handful can be explained by the absolutely insane schedule Augustus kept in his physical prime. Another couple could be singled out by some as flat-out hired losses (aka dives).

The frustrating thing about Emanuel Augustus’ career is that it could’ve been so, so different.

In a more sane atmosphere, it’s easy to envision an alternate Earth where Augustus, at the tail-end of a Hall of Fame career, is a recently-retired junior welterweight king, having fended off young challengers like Timothy Bradley, Devon Alexander, and Amir Khan for as long as he could.

Instead, he’s the guy who tortured himself with twelve fights from October ’97 to September ’98; The guy who went from battling Micky Ward in Ring Magazine’s 2001 Fight of the Year to going back to the ring two months later against Leonard Dorin; The guy who fought 26 undefeated fighters and 39 fighters with one loss or less over a seventeen year career; And he’s the guy whose economic situation forced him into taking quick pay-outs at the expense of his career’s long-term health.

At this point, we’ll never know how good a fully-realized Augustus could have been. We have Floyd Mayweather’s assertion that Augustus, to this day, was his toughest fight. But all we really have is highlights, assumptions and brief glimpses of brilliance.

No other sport eats its own more often and with greater enjoyment than boxing. Fighters without the proper connections go straight into the sport’s virtual meat grinder while fighters with the right publicity machine behind them get to tap dance to stardom. There’s no mercy in boxing and, seemingly, no justice. Every manager and promoter is looking to corral the weak and feed them to their own guys. A fighter like Emanuel Augustus, despite his obvious abilities, will always be devoured whole by a sport where the market for a competent loser is almost as great as the demand for a dominant winner.

None of this really mattered much in the past as an Emanuel Augustus fight was always “must see” TV for all real fight fans. Augustus vs. anybody was going to be an entertaining drama between a well-regarded prospect and this seemingly crazy whirlwind with a horrible record and tremendous talent.

But as time, abuse, and the overwhelming odds of existing outside the system finally caught up with Augustus, a tinge of true sadness was mixed into the tale of one of boxing’s most entertaining characters.

By the time his last fight came around– a unanimous decision loss to Vernon Paris in Detroit on the Timothy Bradley-Devon Alexander undercard in 2011—Augustus was a forgotten entity, barely able to gain entry to his last card’s post-fight press conference.

And he would’ve remained a forgotten entity, if he hadn’t been shot in the back of the head and placed on life support by what appears to be some tragic accident involving a nearby, enraged gun-toting thug.

No matter what anyone tries to tell you, boxing is not like other sports. Unlike the NFL, NBA, or NHL, boxing needs a conscience, above and beyond the scope of normal regulation. Right now, that conscience consists entirely of disembodied, powerless voices screaming from soapboxes while the masses largely ignore them.

There is a place for boxing in today’s sports world and, yes, even in the mainstream sports world, but a house cleaning and the introduction of some decent humanity needs to come before any attempt to move forward.

Fighters like Emanuel Augustus can’t continue to be crushed by the gears of the great boxing machine. Chaos and disorder cannot be the only universal rules by which the sport lives. The status quo of boxing disorder is killing the sport quicker than any other factor and will continue to hack away into the fan base.

Until he got shot, Augustus was just another pug eaten up by the system and spit out onto the streets; another fighter trying to figure out some way to live out the next half of his life while everyone pretended not to see his struggle.

If/When Augustus recovers from his life-threatening injuries, the attention he has received may make him one of the lucky ones who finds a benefactor and a helping hand to go on with the rest of his life in dignity. He’ll be one of the fortunate few to get that kind of assistance.

For the most part, though, old fighters get ignored—especially those who have fallen on hard times and those who do get severely injured. They live as ugly reminders of how they gave themselves to the sport we love and how we paid them back by doing nothing to make that sport a better, safer place.

You can email Paul at paulmagno@theboxingtribune.com with a question or comment or merely say catty things about him on social media. Oh yeah, and  buy his book: Notes from the Boxing Underground! Paul is a full member of the Burger King Kids’ Club, a born iconoclast, and an ordained minister in the Universal Life Church.