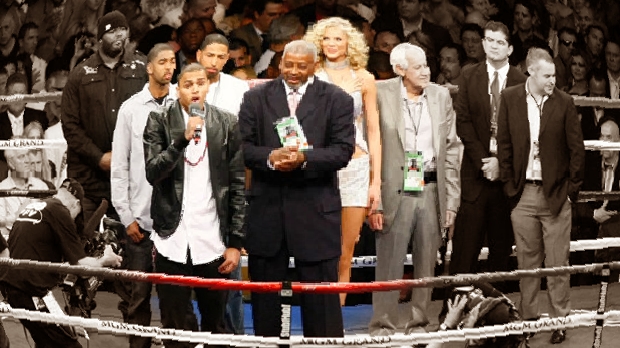 Today’s boxing rings are cluttered up. There are now three mandatory fixtures viewers are obliged to watch before the referee can give instructions and free us to move on to the fight itself. Occasionally there are a couple of additional mandatories, depending on who’s fighting.

The most visually arresting of this group is the matched set (and occasionally trio or quartet) of inflatable love dolls, smilingly blankly just behind the fighters and referee. How they get the same two women to show up at every TV taping is beyond me. But there they are: inflatable love doll A and inflatable love doll B. Bountiful manes of hair, perky tits prominently on display, tiny waistlines, small, rounded asses encased in short shorts. They’re propped up as close to the fighters as possible, coming just short of actually pushing them out of the way with their tits. They appear to have (no matter how many of them there are) a collective IQ of zero, just like real inflatable love dolls. And, although these are unquestionably nice looking girls, literally no one welcomes them.

Compared to the other ring presences, however, the dolls are easy enough work. We are also stuck with the twin chinless wonders and their gentle uncle, an elderly black man who appears to be either talking to himself or chewing cud. The boys talk too, replicating each other with an odd neck craning—a gesture uncannily reminiscent of the one Stevie Wonder makes when singing “I Was Made to Love Her” or “Yester Me Yester You Yesterday.” Accompanying the neck craning is an unemphatic nodding, a kind of “aw shucks” countrified motion, that reinforces the impression that one is witnessing hayseeds in action. The outdated expression “village idiots” springs to mind. The twins direct a running line of chatter to whichever fighter they’re with; there is never any indication that the fighter is listening to them.

The Just Happy to Be Here Award winning senior is often mistaken for Al Haymon, currently boxer’s number 1 wheeler dealer—manager to the most impressive roster of fighters in the business. This legerdemain is clearly a tactic by Haymon’s part, although it is difficult to figure out why he does it. Maybe Haymon thinks prospective business associates will mistake the good natured bumpkin for him, and conclude that he’ll be easy to fool.

In addition to these various clowns, we are often stuck with a few more people we don’t want to see before some high profile fights. At the top of the list is Justin Bieber, a runty adolescent with a silly hat. There was a period of time when preteen girls went crazy for this guy, but that doesn’t count for much here. Fight fans don’t look forward to his uncomfortable ring walk with Floyd Mayweather. They don’t look forward to Bieber’s diametric contrast, Lil Wayne, making the trek from the dressing room, his mile-a minute-gibberish overloading a handheld mic, either.

The thing is, boxing really isn’t about bullshit. Well, that’s not true: boxing is about bullshit. But the bullshit is supposed to stop once the fighters are in the ring. And what people really want to see at that point is a boxing match. Everything else is a distraction. And it’s a distraction that is compounded every time the inflatable dolls, twin chinless wonders, and the cheerful codger make their way to center stage. Boxing fans don’t like any of these people to begin with, and they like them less and less every time they see them.

Charles Farrell has spent most of his professional life moving between music and boxing (with a few detours along the way). He has managed five world-champion boxers and has 30 CDs listed under his name. He’s currently at work on Lowlife, a memoir about music, boxing, gangsterism, and lowlife culture; a boxing anthology edited by Mike Ezra and Carlo Rotella; and a TV series, Fixed and Forgotten, with Tony Roman that exposes and analyzes historic fixes in pro boxing. Listen to his appearance on the Everything Is Stories podcast here:
? EIS 006 Sesquipedalian by Everything Is Stories
Charles Farrell