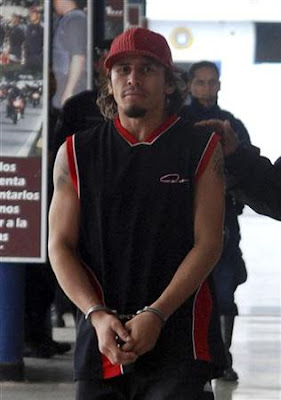 “Now I’ve screwed up for real…I’ll never be able to see my daughter again.”

Edwin Valero, reigning lightweight champ and Venezuelan national hero was in a dingy holding cell in Carabobo, Venezuela, stripped to the waist and slowly coming down from an alcohol and cocaine frenzy that saw him brutally end the life of his 24 year old wife, Jennifer Carolina Viera just hours earlier.

“I feel so alone. I need to talk to somebody,” Valero mumbled as fellow inmates shouted everything imaginable, from hymns of support to cruel sexual innuendo.

“I was going to rehab in Cuba, but I didn’t have my passport. I lost it. We were going to stay in La Guaira until they sent it to me. The flight was supposed to be yesterday.”

Valero was indeed on suicide watch as he spoke, all he wore were sweatpants and lace-less sneakers.

“We were driving and I had been drinking Vodka. I was drinking and drinking. All of a sudden, I realized that someone was following us. It was like 10:30 pm (Saturday). I sped up until we reached a toll booth and I told the police officer that someone wanted to rob or kidnap us…I don’t remember which toll booth. After awhile at the booth, he told us to go to the Hotel Intercontinental in Valencia. I went there because they were trying to kidnap me.”

Valero continued, “(In the hotel lobby), There was a woman leaning back in a chair, staring at my wife. Another man said ‘hello’ to her as well.”

Up in room 624, Valero said that he continued drinking and ingesting cocaine until he lost consciousness in bed with his wife. “I laid next to her and when I woke up she was dead.”

The rest of the story is public record as Valero went down to the reception area soaked in blood and, according to many sources, confessed to the heinous act of stabbing his wife several times. The police were called and they escorted the champion fighter to the holding cell from which he gave his last interview.

“I can’t count on my family at moments like this,” Valero insisted, “I think they’ll find out what happened soon enough. What I would like, though, is to call my manager, Segundo Lujano. He should come.”

Lujano would never have the chance to meet with his troubled client.

Valero hanged himself with his sweatpants in the early morning hours of Monday. He still had feint vital signs when found, but not enough to keep the fighter alive.

As the lifeless body of a national hero was being taken away, Edwin Valero got one last round of applause from his countrymen.

Pounding the doors of their cells and shouting as loud as they could, the other prisoners made the crusty cement walls shake…”Valero, we don’t care! You are the best!” 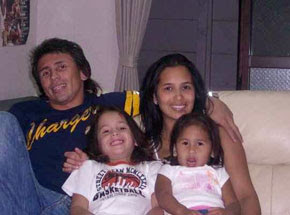 A murdered young wife, two orphans (ages 8 and 5), and a tragically wasted talent…That is the legacy left behind by Edwin Valero, someone who could’ve been the next Roberto Duran, but instead fell into the hole dug by his own inner demons.

Despite the possibility of brain damage caused by his 2001 motorcycle accident or the insanity caused by extreme drug and alcohol addiction, the blame has to fall squarely into the same hands that brutally stabbed his wife to death. It’s not fair to let Valero become a victim, a martyr. There are too many innocent victims in this case to seriously consider him one…Personally, I can’t stomach it right now.

But there are others who played key roles in the degeneration of Valero from a hungry, young prizefighter into an uncontrollable monster. They are also guilty and have blood on their hands.

Valero had a long history of substance abuse and deep depression that everybody in the industry was aware of…He was well-known for aggressive, out of control behavior, dating back to his early days as a fighter, through his time in Japan and right up to the headline-grabbing incident when he put his wife in the hospital and then proceeded to tear a path of destruction through that same medical facility.

Through it all there were plenty of managers, agents and hangers-on…All happy to cover things up, sweep things under the carpet in the best interest of their own bank accounts.

On the couple of incidents where rehab was mandated by the Venezuelan authorities, they were always there to spring him early…Victims were paid “hush money” and stories of substance abuse were buried in his home country, where Valero was portrayed as a fun-loving family man with a mischievous side rather than the cruel, soulless beast that he had really become.

The reality is that Edwin Valero, regular guy, would’ve gotten locked up long ago and maybe would’ve had a chance to recover and rebound. Maybe he could’ve saved a marriage in crisis and, maybe, his children would still have their parents.

Instead, Edwin Valero, marketable prizefighter, was lining pockets with cash and getting classless scumbags into clubs they would normally be laughed out of…He was allowed to spin out of control for as long as the money and fame lasted. The higher ranking he got, the more he was protected…everybody’s pot of gold…he was untouchable.

The end result was pure tragedy.

There should be a lot of people ashamed to be seen in public, burdened by heart-breaking guilt. But I know boxing all too well. These wastes of humanity are already off to their next free ride, ready and willing to do anything to exploit the talent and dedication they could never dream of having.

*Special thanks to the people at El Nacional newspaper in Caracas, Venezuela for providing background info and transcripts.