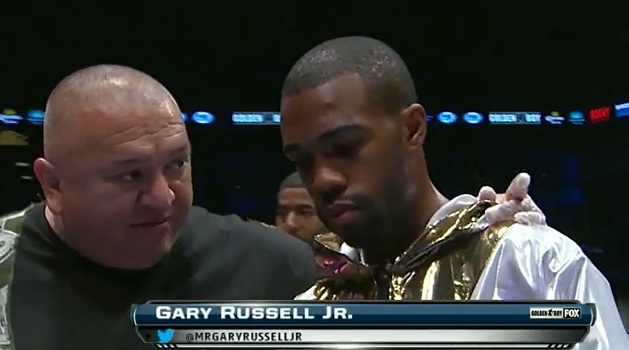 The most offensive part of Gary Russell Jr.’s bout last Thursday wasn’t that the talented Olympian was pitted against yet another soft touch. Russell has been fighting churro vendors and Footlocker assistant managers for almost his entire professional career with the effort earning him a top 10 ranking by all four recognized governing bodies.

His last bout, televised by Fox Sports 1 and on the undercard of Collazo-Ortiz, pitted him against hapless journeyman Miguel Tamayo, who has, literally, never beaten an opponent with a winning record.

As expected, Russell walked away with the easy win and Russell’s promoter, Golden Boy, gets to keep pushing a “hot property” towards a world title.

All of that is well-known by fight fans. Russell is a fabulously talented fighter with a paper-thin resume whose baby-steps progress is starting to raise questions about why, exactly, he’s so protected.

No, the real offense was Russell’s chief second, Rodrigo Mosquera.

As reported by Fight Opinion‘s Zach Arnold, Mosquera is currently serving an indefinite suspension in the state of California, accused of having tampered with the gloves of his fighter, Ricardo Rodriguez, prior to a bout last September.

Mosquera and the super flyweight prospect received their suspensions after a two-month investigation from the California State Athletic Commission (CSAC) found both Mosquera and Rodriquez responsible for the intentionally altered Cleto Reyes gloves Rodriguez was to use that evening.

On September 20, 2013 at 8:35 PM, during the All Star Boxing Promotin’s second bout, Ricardo Rodriguez vs. Fernando Fuentes, Rodriguez’s gloves were found to have insufficient padding upon the inspection by Referee Lou Moret just prior to the beginning of the bout.

Lead inspector Mark Relyea, who was ringside, was summonsed by Referee Lou Moret and requested to examine the gloves. He observed that the “Reyes” gloves had misplaced padding in the front end of both gloves. Relyea instructed Rodriguez to return to the locker room area to obtain a more suitable pair of gloves. The gloves were removed in the hallway by Chief Second Rodrigo Mosquera in the presence of inspector Robert Judge and Relyea. Relyea retrieved both gloves and examined them. Relyea noted a significant reduction in padding in both gloves in the area that covers the fingers and lower knuckle. Relyea also noted that the padding in both gloves was lumped into a large mass on the inside-back portion of the gloves. It appeared that the misplaced padding would have interfered with the fighter’s ability to slide his hand into the glove.

Gilbert Nieves said that he did not provide the gloves in question to Ricardo Rodriguez. He stated that Chief Second Rodrigo Mosquera brought his own gloves claiming the “promoter” gave him permission to use his brand new “Reyes” gloves. Rodrigo Mosquera later claimed that referee Lou Moret had given him expressed permission to use the gloves in question.

After the show, Promoter Ed Holmes was questioned about this incident by Relyea. After being advised of the problem with the gloves, Holmes denied giving Rodrigo Mosquera or anyone else permission to use their own gloves.

Lead Inspector Relyea attempted to locate Ricardo Rodriguez and his other corner personnel, Gloria Mosquera and Ruben Chavez to question them about this incident. However they could not be located.

Inspector Chris Crail supervised the hand wrapping and gloving of Rodriguez. Inspector Crail first became aware of the gloves in question when he noticed they were a different color from the other gloves in the room.

Despite this, on December 13, only about three weeks after the CSAC had suspended him indefinitely, Mosquera showed up at a Golden Boy/Fox Sports 1 card at the Fantasy Springs Casino in Indio, California to work the corner of super featherweight contender, Francisco Vargas.

And it wasn’t like Mosquera snuck into the building to work. Prior to the event, he walked in, applied to the commission inspectors on site for a seconds license, and was granted full permission to work Vargas’ corner– despite having been suspended indefinitely by the same commission less than one month earlier!

Mosquera was back to work, this time in New York, working the corner of Golden Boy’s Gary Russell Jr. and once again on Fox Sports 1. The man who was found to be involved in the removal of padding from his young fighter’s gloves, the man who was allegedly willing to endanger the life of the young man in the opposite corner, is still making his living in the sport he most likely betrayed, still working with lives entrusted to him.

Rodrigo Mosquera and Ricardo Rodriguez are set to appear before the CSAC on Monday, February 10 to hear their ultimate fate. Rodriguez has lived up to the terms of the suspension, Mosquera has not. But even if Mosquera’s license is permanently revoked by the state of California, there’s no guarantee that this will be the end of his boxing career.

This whole case speaks volumes about the ability of state commissions to actually regulate the sport they supervise. It also answers many, many questions as to why boxing has been unable to pull itself into the light of polite society. (Especially frustrating in this case is that it took referee Lou Moret’s last second observation to catch the altered state of the commission-approved gloves).

Do-good bloggers and members of secret journalist societies don’t really understand the dark culture of boxing and the kind of sport that intentionally allows this incompetence to go on. They would do well to sit down with REAL boxing people and learn, rather than queer off in little corners of cyberspace, forming boards and panels and updating their fantasy rankings. An apprenticeship by TV is not enough if you want to really cover this sport.

In the meantime, nothing will get done, no reform will be achieved under the current power structure– and that’s to the absolute benefit of those actually calling the shots in this sport.

The money fueling the shows, shoveled into the sport like coal into a furnace, powers boxing. Those doing the shoveling– the promoters and big-time managers– will never push for reform and mainstream credibility in an honest world that would be rightfully appalled by their practices. It’s better to keep this all in the dark. Your ignorance is bliss to boxing.

This means that nobody really knows what’s going on, nobody cares, and nobody’s really pushing for anyone to know or care.

Want PEDs reform? Push it to the commission, which will surely botch the job, or leave it up to the promoters, themselves, who have the most to lose from honest PEDs testing. Wipe your hands and walk away.

You see, in boxing, everything is about appeasement, sleight of hand, and back door hustle.

Those rotten judges suspended in May to the applause of the clueless media who credit their own call to arms for “swift justice” will be back in August with bigger, better gigs. Crooks, criminals, and pathological creeps feast on boxing’s current chaotic regulatory system and foster its incompetence. This is the way the system works and how shady people keep getting carte blanche to do shady things.

Not everything in boxing is cloak and dagger conspiracy fodder– although, there’s plenty of that going on as well. Most of the garbage we see comes from rampant incompetence perpetuated by a dogged and persistent effort to not change a damn thing.

While the media pats itself on the back for being clever and/or connected, with a good percentage even looking to parlay the pen and pad into their own back door hustle, the fans and the athletes are left to pay the price for the sport’s lack of order.

One wonders whether Fox Sports 1’s sponsors would feel comfortable in supporting this type of potentially lethal incompetence and neglect if they knew the truth.

You can email Paul at paulmagno@theboxingtribune.com or watch as boxing bloggers everywhere do their best to ignore his work. You can also buy his book, Notes from the Boxing Underground! Paul is a full member of the Burger King Kids’ Club, a born iconoclast, and an ordained minister in the Universal Life Church.