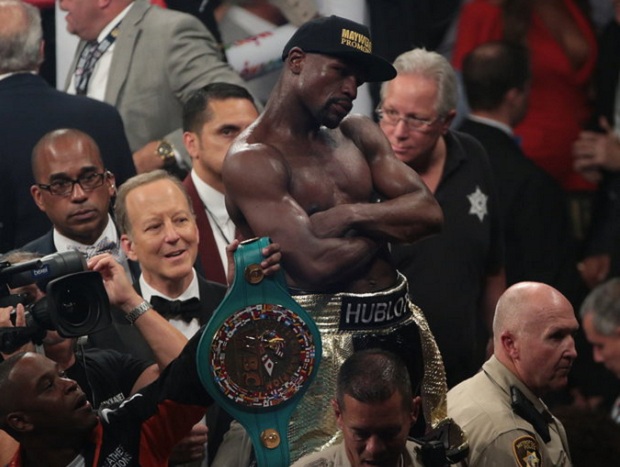 It’s said that rats will eat their own tails if properly upset or cut off from food for an extended period of time.

In the world of boxing writing, the two-legged variety of Rattus Norvegicus is also prone to self-mutilation and fits of pointless self-destructive behavior if properly rattled. And nothing has rattled the rodents into action quite like the May 2 mega-fight between Floyd Mayweather and Manny Pacquiao.

Thomas Hauser, the distinguished writer who holds the record for most awards essentially given to himself (via BWAA cronies), has been on a rampage of late, posting a number of scathing articles about Floyd Mayweather, Mayweather Promotions, and Mayweather adviser Al Haymon.

The 69-year-old Hauser’s sudden burst of inspired prolific rage touches on Mayweather’s domestic abuse record, the business dealings of Haymon, and even a few not-so-veiled jabs at Mayweather’s status as a PEDs-free fighter. But the fire behind the rage always comes down to one issue– His perceived mistreatment when Mayweather-Pacquiao press credentials were handed out.

Hauser was incensed at finding out on the day of the fight that he would have to sit with the “secondary” media in a nearby press tent instead of having full access and a ringside seat inside the arena. He would eventually use his connections at HBO, where he is a paid adviser, to acquire a ticket to cover the fight live. But, still…

Hauser claims that he was targeted by Team Mayweather for being openly critical of the fighter and his history of abuse against women. Hauser had blasted Mayweather on several occasions before the fight, delivering anti-Floyd soliloquies for CNN and ESPN (where he gave, quite possibly, the dumbest and most naive take on domestic violence, ever).

But Hauser wasn’t the only scribe scorned by Team Mayweather’s off-putting approach to media stroking.

Martin Rogers of USA Today, Daniel Roberts of Deadspin, and even self-published, self-loving boxing historian Springs Toledo (as well as a whole host of other media members– including The Boxing Tribune) were denied credentials.

Also denied credentials was former Max Boxing head, Steve Kim, who referred to the snub as a “ban” and would fire back by refusing to give any radio or video interviews from those seeking his viewpoint on the big fight.

The Sweet Science’s David Avila did Kim one better by issuing a public “manifesto” , vowing to personally boycott “all boxing events promoted by Mayweather Promotions or Premiere Boxing Champions, and any events promoted by Floyd Mayweather or Al Haymon” for being assigned to cover the fight from the much less prestigious press tent.

The Sweet Science’s editor, Michael “Woodsy” Woods, who probably should’ve shelved the petty and absolutely cringe-worthy Avila “manifesto,” actually doubled down on the sentiment. He would wish aloud that HBO’s Jim Lampley had taken a “harder edge” when discussing the “(mis)treatment” of the press on Lampley’s The Fight Game program.

The brouhaha even tore Joe Santoliquito, president of the Boxing Writers Association of America (BWAA) away from the buffet line.

“I understand the need to have as many high-level people as possible at ringside,” Santoliquito said.  “But don’t forget who helped Mayweather and Pacquiao get to where they are. The little guys – the ones who write for Internet websites and boxing magazines – helped make these guys. When Mayweather was coming up, we were the ones who wrote about him. We were the ones who wrote about Manny Pacquiao when no one else in America knew who he was. And then you have another group of people who wrote about boxing for major newspapers and left their jobs but still write about boxing from time to time. Too many writers who deserved to be at ringside were pushed out the door because the people in charge felt they didn’t need them anymore.”

So, in essence, Santoliquito is confessing to the one major gripe all of us outsiders and counter-culture types have been saying all along. The boxing media as we know it today is ONLY about delivering publicity in a “one hand washing the other” business structure with the sport’s power brokers.

At the heart of this media discontent is the fact that Mayweather and his people upset this informal publicity-for-access arrangement.

Yes, many of those denied credentials were long-time critics of Mayweather and/or Haymon. But if this is all about delivering publicity for an event via news coverage, as Santoliquito suggests, then Mayweather’s people are well within their rights to weed out the publicity they don’t want for their event.

If there’s a quid pro quo when it comes to boxing media coverage– and, obviously, there is– then what happens when the promoter decides that he simply doesn’t want a certain writer enjoying media privileges while shitting on all those involved in an event?

Let me just emphasize for some of my dedicated stalkers and serial critics out there who only read my stuff so they can ball their fists at the screen and shout insults– I am 100% against promoters and fighter management using media credentials as a way to reward or punish media, but let’s not pretend that this is a game that doesn’t go both ways.

Promoters frequently cultivate cliques of friendly media sources who are rewarded with unfettered access to fighters and live events. Promoters even prop up certain websites with financial support in a wink-wink, unspoken barter for favorable coverage. Certain writers are wined and dined by industry people, taken on sightseeing junkets, and treated as semi-quasi-celebrities by glad-handing industry big shots. Sit down with any savvy boxing insider and they can draw you a flow chart of which writer is in which promoter’s pocket, which writers are openly searching for industry sugar daddies, and who is trying to parlay their reach and journalistic reputation into a back-end money deal for themselves.

Media access has always been about “one hand washing the other.” Anything resembling actual “hard” news in this day and age is the byproduct of a boxing writer scorned, a boxing writer with nothing to lose from bashing someone who refuses to play the game. There is no room, whatsoever, for a writer not on the take who is willing to burn bridges evenly across the board.

Touch on a subject that may affect the business bottom line of a promoter and see just how fast you suddenly stop having access to events, fighters, or anything. See how fast your “colleagues” give you the cold shoulder and/or suddenly begin publicly lashing out at you in attempts to ruin your credibility. See how fast the industry works to starve you out of the business. And it’s not just Mayweather Promotions or Al Haymon that does this.

This is the world that the media created.

It’s a world where media members serve as publicists in exchange for favors and/or money and/or access and/or the type of support a writer needs to stay afloat in the business.

It looks absolutely ridiculous for this media to cry like prissy teenage girls when they suddenly find themselves excluded from the game they helped create.

Suck it up and deal with it guys, it could be worse. You could be a boxing writer living in Mexico, being literally starved to death for refusing to sell out while morons fill his inbox with accusations of being on someone’s payroll.

You can keep Paul alive (literally!) by sending PayPal donations to: paulmagno@theboxingtribune.com. You can also buy his book, Notes from the Boxing Underground! Paul is a full member of the Burger King Kids’ Club, a born iconoclast, and an ordained minister in the Universal Life Church.