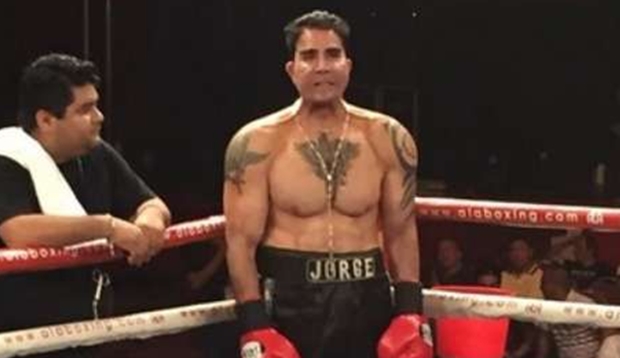 Looking like a cross between Lou Ferrigno and a geisha girl, Mexico’s Jorge Kahwagi, sporting what looked to be oversized pectoral, bicep, and shoulder implants, along with copious amounts of plastic surgery to his face and he what to do, made a “triumphant” return Saturday after ten years away from the ring.

Buried on the Donnie Nietes-Francisco Rodriguez Pinoy Pride 31 undercard in Cebu City, The Philippines, the politician-businessman-celebrity, at 47 years of age, picked up right where he left off by slow-footing and arm-punching his way to a sloppy and highly-suspicious first round knockout of countryman Ramon Olivas.

For those unfamiliar with the odd saga of poor little rich boy, Jorge Kahwagi, just envision a Mexican Jethro Bodine, of Beverly Hillbillies fame, with way too much money, a legion of enablers, and no Uncle Jed around to talk sense into him. Kahwagi is the son of Lebanese-Mexican tycoon Jorge Sr., head of Mexico’s collective chamber of commerce and owner of the nation’s largest newspaper, La Cronica, where Jorge Jr. just happens to be vice president.

In 2001, at the age of 33 and with a minor political office to go along with his inherited business fortune and daddy-bought law degree, Kahwagi decided that he wanted to be a world champion boxer and officially launched his pro career on Top Rank’s Floyd Mayweather-Jesus Chavez/Manny Pacquiao-Agapito Sanchez undercard in San Francisco. He would debut with a first round knockout of Perry Williams, who would be investigated for fight fixing in his very next bout and then never heard from again.

From 2001 to 2005, Kahwagi won a series of questionable contests via dubious knockout, using his connections to gain spots on the televised undercards of well-known fighters such as Julio Cesar Chavez, Erik Morales, and Jorge Arce. In his third pro fight, he would “win” the Mexican cruiserweight title against the 0-4 Jose Lopez. The WBC and WBO, not to be outdone by greedy local commissions looking to cash in on Kahwagi’s name and cuddle up to his power, would both “somehow” find a way to sanction easy “Latino” and “International” title wins for the mega-wealthy daddy’s boy.

The corresponding buzz from his easy TV wins pushed the oafish jet-setter to even higher levels of fame and notoriety in Mexico, allowing his political standing to increase along with his general Q-rating. He would win an election to become a government delegate for the Partido Nueva Alianza, where his presence appeared to be more tolerated than actually appreciated. And even as boxing aficionados cried foul over the legitimacy of his ring victories, his fame grew— until the buffoonery became too much, even for Mexican pop culture.

In 2005, the boxing world assumed that it had seen the last of the wannabe playboy-boxer-millionaire-lawyer-politician after a disgraceful showing against Brazil’s Roberto Coelho, who battered him senseless in the first round only to suddenly stop punching in the second and then succumb to a few sloppy arm punches. Fans in attendance in La Paz, Mexico pelted the ring with garbage after the questionable knockout. The farcical fight even inspired local boxing commissioner Jose Manzur Arguelles to urge that Kahwagi retire from boxing “for the sake of the sport and for the respect of the fans.” Hall of Fame trainer Ignacio “Nacho” Beristain publicly wondered aloud whether the undefeated boxing politician, who was 11-0 with 11 knockouts at the time, had ever even had a day of training.

After the public embarrassment of the Coelho fight, Kahwagi removed himself from boxing, allegedly using his influence to have all evidence of past fights removed from YouTube, and drifted from one sordid scandal to the next. He would get manhandled by Mexican wrestler Cibernetico in a brawl on live TV, take a potshot at rotund comedian Rafa Balderrama on a comedy sketch show, be accused of domestic violence, show up disheveled and drunk at a televised government meeting where his slurred-speech discourse generated snickers from his fellow delegates, and nearly lose his eyesight after reportedly undergoing a procedure in Panama to change his eye color from brown to blue. Kahwagi was also featured in the Mexican version of Celebrity Big Brother, a move that prompted Mexican journalist Adrian Trejo to spearhead a voting campaign to keep him in the house for as long as possible because he “causes less harm on the country, boxing and ecology, while he is contained in the ‘Big Brother’ house.”

Rumor has it that Kahwagi has presidential aspirations now and, following the blueprint of his initial climb to fame, he leveraged his way into a televised spot on Saturday’s Pinoy Pride card with the help of promoter Fernando Beltran of Zanfer Promotions.

But it’s hard to imagine anything about Saturday’s performance being parlayed into something positive—not with Kahwagi’s comically-modified physical appearance or his show-closing offensive surge, punctuated by the play-by-play guy’s incredulous declaration of “He throws punches in slow motion!”

The bout with Olivas was so awful that it drew a disclaimer from the Filipino broadcast team immediately after the stoppage:

“Let’s set the record straight. This fight was requested by Fernando Beltran of Zanfer Promotions, alright, and ALA [Promotions] accommodated them because they do some business with Zanfer…but it meant nothing because I think Zanfer takes care of all the expenses.”

So, what’s next for Jorge Kahwagi?

Even without boxing or the Mexican Presidency, the guy is filthy, stinking rich and has his hands just about everywhere. He dates models and starlets, travels the world, and can ruin entire industries on a whim. Of course, none of that buys class or ability. And for all his money, he can’t buy his way into boxing legitimacy.

Even in the scurrilous world of professional prizefighting, where decency and common sense are rewarded with unemployment and slow starvation, there are still some things that can’t be bought. Take that as a minor victory in the constant and ongoing battle for boxing’s soul.

Watch the freak show for yourself: