In the mainstream boxing media, there have been a lot of statements made over the past few days regarding Premier Boxing Champions (PBC) and whether the series created by Al Haymon is on its last legs. In truth, a lot has been said about PBC in a negative context since its inception in early 2015, but here we will focus primarily on the last several days.

On Wednesday, Dan Rafael at ESPN.com published a story discussing the end of PBC’s two-year contract with Spike TV. In it, Rafael claimed that David Schwarz, Senior Vice President of Communications at Spike TV, said that one of the two reasons Spike did not seek to continue its commitment to PBC was “a general dissatisfaction with the quality of cards being provided by PBC founder Al Haymon.”

Rafael goes on to state that “PBC continues to put on regular cards on Fox Sports 1, mainly featuring prospects, and Showtime, which pays seven-figure rights fees. But NBC is essentially finished with the series, having already dropped it from NBC Sports Net and holding off on any remaining network dates until at least this fall, though it is unclear if Haymon already paid for the time. PBC on ESPN’s new slate of cards was scheduled to debut Friday night but is off with the remainder of the spring slate in question.”

I reached out to Mr. Schwarz directly for a response about the ESPN article. He responded: “Spike and the PBC have enjoyed a very successful relationship with great fights featuring high production values. The network was very satisfied with the quality of fights that produced strong ratings and many memorable moments—any inference to the contrary is inaccurate. Now that our 2 year deal is complete—we are having ongoing discussions to potentially air future events that makes [sic] sense for both parties.”

Tim Smith, Vice President of Communications at PBC, confirmed this. “Our contract with Spike was for two years. The contract ended. The relationship didn’t end. We still have dialogue, we still have a good relationship. And I think that’s what prompted Spike to put out their [statement] that they weren’t dissatisfied with the programming. We’re talking about fights that make sense for both parties.

“[Spike is] a network that is going through a rebranding, and wants to emphasize the combat sport that they own [Bellator MMA, owned by Viacom, Spike’s parent company]. So it only makes sense that if they’re going to spend money on anything combat sports related, they’d re-invest their money into that and make that a success. It’s also being rebranded as Paramount Network and they’re going with more scripted shows, so they’re gonna be spending a lot more money in that area. So they’re figuring out what they want to do as well.”

And regarding Rafael’s statement about Showtime’s “seven-figure rights fees,” Smith said, “A lot of the promoters were upset because our guys get paid. Al’s whole thing is making sure these guys get paid.”

In addition to Dan Rafael’s piece, other members of the boxing media joined in on social media to proclaim PBC “dead.” Among them was Chris Mannix of Yahoo! Sports, who declared: 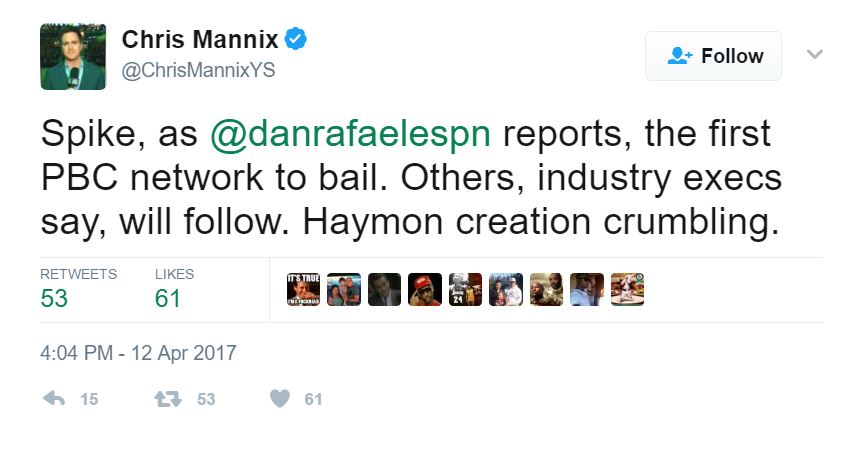 The worst part of this is that these boxing writers who routinely claim that PBC is failing rarely cite real sources. Like Mannix’s post above, they have a tendency to say they heard from “industry experts” or the like, or as in Rafael’s case, completely misquote a source. If there was some basis in reality and a real source or two with knowledge of the situation made a statement about PBC’s financial situation, then perhaps we would sit up and listen. But as is, it appears to be nothing more than rumors.

In addition to the rebranding changes happening at Spike, the output of Premier Boxing Champions just since the beginning of 2017 and the television ratings for their events from this year certainly don’t indicate that networks are “bailing” on PBC.

In fact, PBC has had 14 separate cards on television since the start of the year. Among those was Thurman vs. Garcia, which aired on primetime CBS and had a whopping 5.1 million viewers—the highest-rated primetime boxing broadcast since 1998. But even PBC’s more “average” broadcasts saw ratings like 643,000 for Frampton vs. Santa Cruz in January (on Showtime), and 1.86 million for Wilder vs. Washington in February (on Fox).

By way of comparison, HBO (traditionally considered the king of premium boxing broadcasting) has aired 4 boxing shows so far this year, and one of those was a pay-per-view card. The pay-per-view headliner saw one of HBO’s most popular fighters in Gennady Golovkin fighting on pay-per-view versus PBC’s Daniel Jacobs on March 18, and reports were that it sold between 130,000-150,000 buys. Vasyl Lomachenko, another increasingly popular boxer signed with HBO, fought Jason Sosa on April 8, and viewers reached a peak of 886,000, which is fairly good for premium boxing these days.

The bottom line is that PBC’s ratings have been up and down like any boxing broadcast, but their highs are extremely high. Yet little is ever said about those highs.

There have been snide comments made about perceived mismatches on PBC cards. Some of those criticisms are valid, but what is unfair is the fact that one rarely hears mention of mismatches put on by PBC’s competitors. Mismatches are a boxing problem, not a PBC problem.

Smith addressed some of PBC’s critics broadly. “I know that people have their agendas, and that’s just the hardest thing. Because if you were a fan of the sport, you would want to do everything possible to see the sport expanded, so that the audience would grow, and the sport would grow. So why would you want to take the sport back to being more of a niche sport?”

Caryn is a professional writer, and has written and published everything from ongoing comic books and graphic novels to sports writing, from novels to children's books. Getting to the truth of a story or a situation is what drives her work.

Caryn also writes about boxing at Boxing.com and FightHype.com.