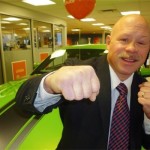 After suffering a severe heart attack last week which nearly resulted in his death, Scotty Olson is home with his family and recovering .  The 46 year old former flyweight champion suffered the attack on the morning of January 18th that resulted in him being put in a medically induced coma following surgery where they put two stents into his heart. As Olson explained the … END_OF_DOCUMENT_TOKEN_TO_BE_REPLACED