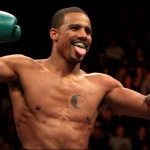 Showtime plans on having the WBC light heavyweight title fight between champion Adonis Stevenson and Dmitry Sukhotskiy headline a four-bout card on December 19 at the Pepsi Coliseum in Quebec in the network's final card of 2014. On the undercard, Andre Dirrell (23-1, 16 KOs) will face an opponent to be named while light heavyweight prospect and Russian Olympian Artur … END_OF_DOCUMENT_TOKEN_TO_BE_REPLACED