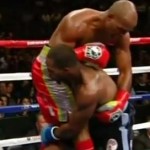 An agreement has been reached for WBC light heavyweight champion Bernard Hopkins (52-5-2, 32 KOs) to defend his title against Chad Dawson (30-1, 17 KOs) in a rematch of last October’s controversial two-round fight. The rematch is scheduled to take place on April 28th at the Boardwalk Hall in Atlantic City, New Jersey. The first fight between Hopkins and Dawson came to an … END_OF_DOCUMENT_TOKEN_TO_BE_REPLACED