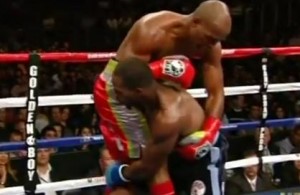 An agreement has been reached for WBC light heavyweight champion Bernard Hopkins (52-5-2, 32 KOs) to defend his title against Chad Dawson (30-1, 17 KOs) in a rematch of last October’s controversial two-round fight. The rematch is scheduled to take place on April 28th at the Boardwalk Hall in Atlantic City, New Jersey.

The first fight between Hopkins and Dawson came to an abrupt end in the second round. A blatant foul committed by Dawson caused Hopkins to separate his left shoulder. Referee Pat Russell incorrectly ruled Hopkins’ injury a result of a legal boxing maneuver and scored the bout a technical knockout victory for Dawson. The WBC refused to honor to decision, and promptly declared the bout a no-contest, restoring Hopkins as its champion. The California State Athletic Commission followed suit in December, when they formally changed the result to a no-contest in an appeals hearing.

At its 49th convention in December, the WBC ordered an immediate rematch. Yesterday’s agreement avoids a purse bid between Golden Boy and Gary Shaw, originally scheduled to take place on Friday. Both sides are currently negotiating a broadcast deal with HBO.