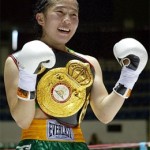 In Seoul, South Korea, Ju-Hee Kim (17-1-1, 8 KO’s) successfully defended her four female light flyweight championships with a 10th round stoppage of Thailand’s Ploynapa Sakrungrueng (9-3, 0 KO). This was the second time Kim has defeated Sakrungrueng; the two met in March of this year with Kim winning by a sixth round TKO. Between bouts, Sakrungrueng managed to rack up four … END_OF_DOCUMENT_TOKEN_TO_BE_REPLACED