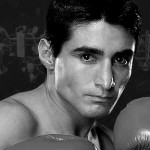 by Fox Doucette We've been hitting the oldest possible old-school of the television and film era quite a bit lately. Carmen Basilio, Marcel Cerdan, Tony Zale...fighters whose last fights were years before most of the readers were even born. Not tonight. We're going back no further than the end of the Seventies and even hitting a few fighters who were in action in this … END_OF_DOCUMENT_TOKEN_TO_BE_REPLACED