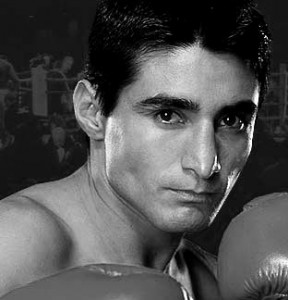 We’ve been hitting the oldest possible old-school of the television and film era quite a bit lately. Carmen Basilio, Marcel Cerdan, Tony Zale…fighters whose last fights were years before most of the readers were even born.

Not tonight. We’re going back no further than the end of the Seventies and even hitting a few fighters who were in action in this millennium, as Erik Morales gets in the time machine fresh off his four-round stoppage of Junior Jones in 1998 to take on Wilfredo Gomez, who comes in from his pounding of Carlos Zarate in 1978.

Meanwhile, in the co-feature, Marco Antonio Barrera, in from his 2000 smashing of Jesus Salud, gets a scrap with Juan Manuel Lopez, who gets in the time machine after his single-round slaughter of Daniel Ponce de Leon on June 7, 2008.

Barrera showed the first signs of being able to throw a straight right hand rather than the hooking right that had defined his early career. That same right hand landed frequently to devastating effect against a southpaw in Barrera’s very next fight, against Prince Naseem Hamed.

Meanwhile, Lopez was at the height of his powers in his first fight against Ponce de Leon, who he destroyed in a single round with a couple of powerhouse right hooks from the southpaw stance. We know this fight’s going to be explosive, but who’s getting the punch there first?

Barrera’s tendency to loop the right hand worked against him almost from the word go on this one. He simply couldn’t get that right to the target, giving Lopez way too much time to see the punch coming.

Meanwhile, Lopez was content to wait out the first round, figure out his opponent’s angle of attack, use the jab, and use his long arms to fight taller than his height thanks to his long reach.

Barrera threw some ineffective left hooks, some wild right crosses, and generally didn’t land anything; Lopez snapped a few jabs out but kept the left hand in its holster rather than risk getting caught loading up on the power shot. It wasn’t much of a round, but it set the pace and the tone.

Lopez started to open up. Barrera had a hitch in his delivery that the HBO team pointed out in the Salud fight; when he went to throw the left hook, he dropped the hand and telegraphed the punch. JuanMa’s corner noticed, and between rounds, they encouraged him to uncork the right hook before Barrera could get the punch to the target.

Lopez landed one of the big right hooks right over the top, forcing Barrera back to the ropes, and JuanMa began to pour on the punishment. Later in Barrera’s career, he would suffer the only knockout of his long collection of ring wars against Manny Pacquiao, and a lot of the southpaw power Pacquiao brought to bear on Barrera was on display here.

Another right hook had Barrera on spaghetti legs; a monster straight left froze the Baby-Faced Assassin in place, and one more right hook crashed home with such force that it seemed to slow the entire arena down to bullet time. Barrera crashed to the ground in a heap, referee Tony Weeks reached the count of ten, and the fight was over.

Wilfredo Gomez was arguably the very best junior featherweight who ever stepped into the ring. He was 18-0 in title fights at 122 pounds across a reign that lasted nearly six years, broken up only by an ill-chosen attempt to win the featherweight title that got derailed by Salvador Sanchez. After a draw in his first pro fight, when Gomez was scarcely two weeks past his 18th birthday, he knocked out his next 32 opponents, never hearing the final bell at the scheduled distance in any fight he fought as a junior featherweight after that debut contest.

Meanwhile, Erik Morales packed quite a bit of pop in his own punches, but his lunging tendencies, no matter how much leverage he put on his shots, made him easy to hit. This was going to be a kill-or-be-killed contest. Let’s get right to it.

Gomez, as much of a killer as he was, did tend to wait for his opponent to show his hand before he decided on a method by which he would stop the guy. For the entirety of the first round, Gomez let Morales set the tone, parrying and jabbing against El Terrible’s lunging jab to the body and the big right hand he’d load up on and try to throw over the top.

Morales won the first round easily, but Gomez, never the type to play fair, let Morales know what was what by sneaking in a left hook of his own right after the bell. The shot landed flush, much in the same way Gomez did damage against Carlos Zarate in the time machine fight, and Morales staggered a bit as he made his way to his corner. Referee Raul Caiz let it go; Morales’ father and trainer raised one hell of an objection.

Gomez figured out the timing on Morales’ lunges in the first round, and in the second round, he began to cash in those chips. He landed the hook over the top of the lunging right hand. He put the right cross over the lunging jab. He forced Morales back to a standing position on the outside, and began to charge in on the three-inches-taller man, slip the jab, and pound the body. Morales was on the defensive. For his entire career, he had struggled with big punchers; Manny Pacquiao knocked him out twice, and Marcos Maidana made him a one-eyed fighter in their contest late in Erik’s career.

All this had to be in the mind of the smart viewer when Morales’ eye started to swell from a series of left hands from Gomez. As the round ended, the mouse looked well on its way to creating real problems for Morales.

Gomez continued to attack the eye. He slipped to the right where Morales’ peripheral vision was restricted and threw the left hook from a bit wider angle. Sure, he ate a jab or two in the effort, but the intent was clear; he was going to close that eye and finish the show. To vary up the attack and keep Morales from going purely by instinct, he stuck a few straight rights into the other half of El Terrible’s face, putting some swelling onto the left eye as well.

For three rounds this continued. Gomez landed bigger and bigger shots, testing the chin and the physiology of Erik Morales.

Morales was practically blind in both eyes when the end came. A two-punch combination, which appeared only as a blur of red leather, snapped the head of Morales back on the leading straight right and crumpled him in a heap on the canvas on the left hook. Morales beat the count, but when Caiz saw the swelling, he waved off the contest rather than let the Tijuana man take any more punishment. The great knockout artist had done it again.

Muhammad Ali. Lennox Lewis. Any questions? Your co-feature is another heavyweight explosion, as Jerry Quarry and Trevor Berbick take their whacks at each other. We go from junior featherweights to guys who would never have the word “feather” used to describe any part of their careers. It’s going to be a big show.

Thanks for reading, and see you next week!