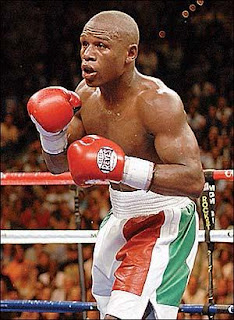 According to anonymous sources close to the 5-time/5-division former pound-for-pound king, the official return of Floyd Mayweather Jr. will be announced on Saturday either before the scheduled Ricky Hatton/Manny Pacquiao bout or immediately after.

The winner of Pacquiao/Hatton will then likely take on the winner of Mayweather/Marquez at some point in the Winter in a bout that will be hyped as a battle for the mythical Pound-for-Pound title.

Mayweather retired following his 10th round TKO over Hatton in December of 2007, completing a year in which he made approximately 50 million dollars in massive PPV successes against Hatton and Oscar De la Hoya.