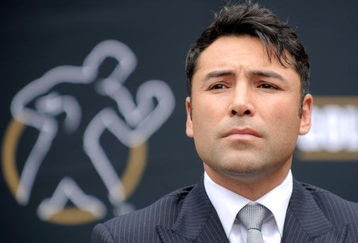 You could feel the tension in the air as the tide started turning against Golden Boy prospect, Victor Ortiz, this past Saturday at the Staples Center.

And, when Ortiz eventually caved in under the pressure of Marcos Maidana in the sixth, the frustration exploded as Shane Mosley gave Ortiz a few tense words, shortly followed by a second tongue lashing from Golden Boy boss, Oscar De la Hoya.

But you could hardly blame them for their frustration. The Ortiz loss was just the latest in a series of unfortunate turns for De la Hoya and his promotional company.

Now, just about six months later, momentum has shifted away from the promotional company that, at one point, boasted veteran legends such as Mosley, Bernard Hopkins, Marco Antonio Barrera, Juan Manuel Marquez, Ricky Hatton and De la Hoya himself.

The Golden Boy of the recent past was on top of the world, snatching up as many veteran names as boxing headlines and brokering a deal with HBO which would essentially give them carte blanche to fill a lion’s share of the available TV dates with fights and fighters of their choosing.

The boxing world, literally, was thrown at their feet and they most definitely had a plan for world domination.

Even with De la Hoya having been retired by Manny Pacquiao at the end of ’08, the strategy would be simple: Mosley and Hopkins would build off of their remarkable wins against Margarito and Kelly Pavlik respectively while the entire promotion crossed its fingers that Ricky Hatton could somehow find a way to beat Pacquiao.

In the downtime between headline-grabbing fights by future Hall of Fame inductees, Golden Boy would satisfy the fans by highlighting their next generation of stars, all on the verge of greatness…or so they would have you believe.

Unfortunately, the boxing world is often not the most predictable and in a matter of just a few months, GBP would find the heavy-handed Kirkland behind bars for parole violation, Mares being nursed back to health following eye surgery and Ortiz and Guerrero being tagged with the label of being quitters in what was to be their “coming out” parties on HBO.

And to make matters worse, their “bankable” talents, Mosley and Hopkins, have not been able to find the type of fight they feel they need at this stage of their careers. Mosley has been desperately searching for a fight with an indifferent Pacquiao while Hopkins’ only legit attempts at a fight were a half-hearted offer to Cruiserweight champ Tomasz Adamek and a rumored bout with the UK’s Super Middleweight world champ, Carl Froch.

In the meantime, HBO has been saddled with mostly luke warm events that generate mediocre ratings and cost a relative fortune to stage. With the exception of Mosley-Margarito and Golden Boy/Top Rank promoted Pacquiao vs. Hatton, you’d be hard-pressed to find any positive Golden Boy events on HBO.

Don’t think this fact is lost on HBO executives and don’t think it’s lost on Golden Boy’s promotional rivals, either.

“They [HBO] gave their dates to one promoter, who’s stable has now been wiped out. They made a bad mistake. They are not evil people, and I can’t blame Golden Boy for grabbing those dates, but it shows that it wasn’t the wisest thing for them to do,” said Bob Arum of Top Rank.

Another blow to GBP is the fact that, in order to make the marquee fights for their established stars, they will need the cooperation of the other promoters who, at this point, have been driven to resentment by Golden Boy’s perceived status as HBO’s pet promotion.

So, with their best and brightest pretty much taken out of the equation and legit future stars, Erislandy Lara and Danny Jacobs, still too far away to be a factor, questions about the immediate future of Golden Boy have to be raised.

Will HBO grow frustrated with the poor showings and make Golden Boy go back to booking dates on a fight by fight basis?

And if HBO does this, will GBP be able to compete with a company like Top Rank who has a much deeper roster and a keener matchmaking eye at this point?

Can Oscar’s company survive the decade? Probably, but expect a major re-tooling of the promotion and a reluctant admission from them that they do indeed need to co-exist with the other promotional companies in order to stay afloat.

2010 will be an interesting year for the sport and a crucial one for Golden Boy.