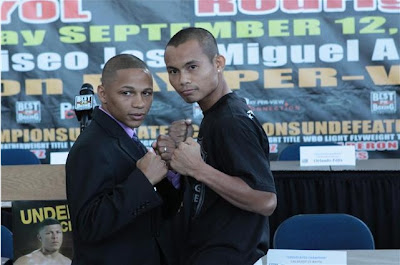 Last Friday, September 4th, Philippine’s Marvin “Marvelous” Sonsona not only became one of the youngest Filipino world titlists in history, he became the first Filipino fighter to beat a Puerto Rican champion. After compiling a 6-0-2 (5kos) record in world title fight against the Philippines, Puerto Rico loses the first of this unofficial 3 fight series and gets to meet the latest pinoy boxing sensation in the explosive punching Sonsona.

Round two gives us a rematch of a fight that in many eyes was shaping up to be Philippines’ first big win over one of Puerto Rico’s best. Rodel Mayol gets a second shot at defensive pound for pound specialist Ivan “Iron Boy” Calderon’s 108 pounds world title. The first fight was ended prematurely after accidental clashes of heads caused two severe cuts on the champion with the judges score cards signaling a draw at the time of the stoppage.

This will be Mayol’s fourth try to win a world title and he’s glaring with confidence after fighting on equal terms with the champion the last time they met. Calderon who has been sparring with now former fellow champion Jose “Carita” Lopez in preparation for this bout has promised to get back to his usual self for the rematch. According to the champion, he was told that an impressive win against Mayol could help his case to gain more exposure, probably clinch a spot on the televised portion of an HBO card.

Calderon admits to have deviated from his traditional elusive style in order to impress the New York audience and vows it will not be the case next time they meet. There have already been talks of it being more a case of Calderon having already hit his prime and his last fight signaling the beginning of a downward spiral characteristic of slick boxers when father time finally catches up with them.

The “Iron Boy” has denied such speculations. “I took the rematch because I know I can win. I take nothing away from Mayol but he saw the wrong Calderon. I will show many people that at 34 I’m still hungry for victory. That wasn’t the usual Calderon. This time I will not stand still, ill do my usual fight of hitting without getting hit and if he comes aggressive I will just play him like I did with Cazares and Dieppa, ” claimed the champion during the final press conference.

Whichever the case Mayol has become Calderon’s first blemish on what used to be a clean record, he’s getting an immediate shot at finishing the job and he’s vowed to get it done. “I’m coming to get the title. I already showed I can beat him, now I know I will beat him.”

The stage is set for the next round of this emerging rivalry, Lopez and Sonsona gave us a thrilling battle which received big compliments from many viewers. Round 2 will bring us a proud champion who’s found himself with something to prove against a hungry challenger who’s already tasted blood, perfect ingredients for another memorable fight.