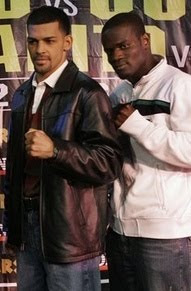 HBO broadcasters have unanimously agreed that the co-feature bout between Paul Williams – Kelly Pavlik on December the 5th in Atlantic City, should be Joshua Clottey vs. Carlos Quintana. With rumours of a Juan Diaz – Paulie Malignaggi rematch, and speculation that Timothy Bradley and Lamont Peterson will be fighting for Bradley’s WBO belt, they have finally decided to host a contest between two former welterweight belt-holders, Ghanaian Joshua Clottey and Puerto Rican southpaw Carlos Quintana at a catchweight of 149 lbs. Both struggled to hit the big time in the inflated ego division and will compete in a 10 round fight on the live broadcast.

Quintana, 32, was the first to defeat Colombian icon Joel Julio, and is the only guy to have beaten Paul Williams in the professional ranks, before suffering a devastating first round knockout defeat in their second contest. He has also been stopped by Miguel Cotto in 5 rounds. Clottey, also 32, has dropped competitive and controversial decisions to Antonio Margarito and more recently Miguel Cotto. He won the vacant IBF welterweight title against Zab Judah last year, before vacating the belt to fight for a bigger pay-check, Miguel Cotto. The ‘Grand Master’ who fights out of Bronx, New York, thought he had a big money fight on December 26 against Shane Mosley, but when HBO pulled the plug, he found a spot as the chief support for the middleweight contest.

Both fighters are still regarded as world-class technicians, despite recent setbacks and difficult defeats. The winner of the bout will probably move on to bigger and better things, Andre Berto perhaps, while the loser is likely to permanently move up to junior middleweight. Whatever happens, it’s still another great fight coming our way in December.