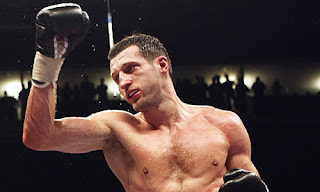 UK fans may have built former WBC Champion Carl Froch 26-0 (20 KOs) up to be the next 168 lbs king after Chris Eubank, Nigel Benn and Joe Calzaghe dominated the decision for years, but Dirrell wasn’t buying it. And after a little more than 12 rounds of action at the Trent FM Arena, neither is anybody else.

Due to Showtime’s lack of preparation, the fight was delayed for half an hour. The Nottingham faithful patiently sang along to Johnny Cash and The Beatles at 02:30 am. They weren’t treated to a slug-fest, but more of a clash of styles and negativity on Dirrell’s part.

The hard-punching Brit Froch, 167.5, barely kept WBC super middleweight belt as he attacked heavily hyped Andre Dirrell, 167.5 at the second attempt, in the middle rounds and withstood the challenger’s furious retaliation down the stretch to win a close split decision over 12 heats. Afterward, the 26 year-old Dirrell, 18-1 (13 KOs), displayed his disgust about a point deduction in the 10th round in the post-fight interview. He’ll face Arthur Abraham next.

Pre-fight favourite Froch, 32, didn’t look as strong as usual and was slow and sluggish to begin with. He often lost his balance when missing punches and was countered by the much quicker Dirrell. This was Froch’s second defence of his WBC belt, and certainly not his best. But despite the belt-holder’s poor tactics, Dirrell could do no better than lose narrowly.

Dirrell didn’t stamp enough authority in the cagey rounds to win them against the defending champion as Froch struggled to find rhythm. The American did well to avert Froch’s vaunted opening attacks but it came to no avail as they jabbed for the opening two rounds. Dirrell turned loose in the 4th, switch-hitting and using his footwork to dance around Froch. It became a see-saw battle in the fifth on, as Froch and Dirrell mixed it up, but they missed the target on most occasions. Dirrell repeatedly hit Froch’s gloves with full force, his lack of precision costing him some points. With more composure and coolness, Dirrell could have caught the frustrated Froch, whose punches were a little more free-swinging than the challenger.

There were some very difficult rounds to score, but Froch certainly held the lead through 7 rounds, so Dirrell became more aggressive in the final half of the fight. Unfortunately, his constant clinching lost him a point, which made Dirrell fight a bit more front-foot. The final rounds were even, one for Dirrell and one for Froch. His negativity cost him some crucial rounds at the core stages of the fight. Froch pulled out a split decision, 115-112 (X2) to the champion and 114-113 to Dirrell.

Dirrell should have won the bout, but he didn’t sustain a consistent offence and lost the close rounds to the Englishman. Dirrell didn’t throw combinations. He just threw occasional jabs that were absorbed on Froch’s gloves. He came to Nottimgham to steal a decision, not to fight. He ran and hugged and didn’t do enough to beat the champion. Sometimes it takes more than that to beat a champion. That’s why Dirrell will need a massive performance to beat Arthur Abraham in stage 2. Carl Froch will fight Mikkel Kessler in a mouth-watering contest between two of the division’s finest.