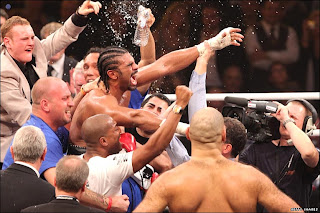 For the heavyweights, boxing’s circus act, the venue seemed wonderfully apt. The centrally located Nurenberg Arena, a major concert venue with a soccer stadium next door, built in the shape of the circus tent that once occupied this site, according to Don King’s folklore.

Nikolay Valuev might have been fed up of being touted as the modern day Primo Carnera, but David Haye was definitely no modern day Joe Louis. As the two squared up in a woeful bout, Haye made little to suggest that he could topple either Klitschko.

It was definitely not first rate entertainment, as both boxers failed to excite in any form until Haye landed a left hook that wobbled the giant in the twelfth. With Valuev the aggressor, he plodded forward throwing occasional jabs that never landed, with Haye sliding left and right, occasionally throwing a punch himself.

Haye had a slight lead after 4, but Valuev came on strong in the middle rounds to gain a substantial lead in front of his adopted home crowd. With some home cooking expected for Valuev, Haye upped the pace a bit, throwing more punches in the later rounds to answer the question marks over his stamina.

With the trainers giving us more excitement than the fighters, few even argued that nobody deserved to claim the belt. Judges Tom Miller and Stefano Carozza scored the fight 116-112 in favour of the challenger, with Spaniard Juan Manuel Garcia Reyes scoring it a draw, 114-114. Haye the winner by majority decision and now holding the WBA version, he might be qualified to fight a Klitschko.

Whether he is ready for such an adventure is a different matter. Unquestionably, the 29 year old Londoner has the mouth to talk up the fight, but he has only had three fights at heavyweight and he showed the lack of experience that is required to topple a 6’ 6’’ Ukranian. He out-landed Valuev, but was frustrated in his efforts to produce a suitably stirring climax and his power was a long way short of awe-inspiring.

On the undercard, John Ruiz stopped Adnan Serin to solidify his position as #1 challenger with WBA. He is likely to face champion Haye on April 24, at the O2 Arena London next year.

Haye cited an injured right arm in round 2 or 3 and blamed his quieter performance on the injury. With Haye likely to move on to bigger and better things, retirement beckons in the future for Valuev, even though 46 year old heavyweights can still compete in a title fight!

So much for rejuvenating the heavyweight division. Come of the hour, come of the man. Definitely not the case tonight. Maybe Adamek takes over the reigns as the great hope. Or maybe Haye will prove that he had forgotten his slingshot and stones at home this time.

Did David Haye impress you in any form tonight? Or did Valuev forget that he was in a boxing ring? Discuss on our brand new board….