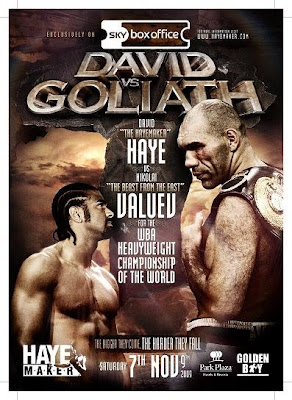 One of the talking points that got my attention after watching Sky Sports’ coverage of the David vs. Goliath PPV in Nuremberg on Saturday night, was how on earth did Jim Watt gave that fight to Nikolay Valuev. I have to share the wonder and amazement that such an articulate and intelligent commentator can use clichés to brainwash the naive casual boxing public to believe that the fight was competitive.

Watt, who was a fine world champion in his day, in my humble opinion, got this one wrong. His argument that you could not award rounds to the Brit as he was throwing one shot at a time ignored the fact that, while Valuev was throwing more, he was landing nothing. In my fight report and on the forum, I said that Adam Booth landed more punches than Nikolay Valuev, and I still believe I’m right.

But it’s much more complicated than that. Haye’s single shots were landing most of the time and the Russian was missing. Haye said in the pre-fight press conference that he was going to make Valuev look silly, and he matched up to his comment. The Russian was clueless, clumsy and bamboozled. If you watched the action again and asked yourself who was doing the boxing, there was only one answer. If Valuev would’ve been knocked down in the final round, he wouldn’t have got up. He knew he was truly beaten on the night.

There are many meaningless clichés in boxing. You have to catch the judges’ attention by going forward and the challenger has to take the fight to the champion are just some examples of the crap that most writers use to back up their argument.

There is no logic to any of those previous clichés. A boxing match is a boxing match. Another cliché is hit and don’t be hit. This should mean something to every judge. It’s what Haye executed with a lot of success, from the first bell to the last. There were some moments where he went too long without landing a scoring shot, but nowhere near as long as that lumpy giant Valuev.

Long ago, judges took note of boxing ability into context as well as sheer aggression. Valuev showed a lot of the latter and very little of the former.

Another point I picked up is no-one gave any praise for Haye’s trainer, Adam Booth, who layed out the perfect tactical fight for Haye to execute. Did Haye need to change tactics any time in the fight? No. You could say that every trainer would’ve given him that particular game plan. But not to the extent that everything went Haye’s way throughout the twelve stanzas despite his broken hand.

I can guarantee you that Haye truly frustrated the Beast From The East into submission. Sorry Mr Watt, Haye boxed his heart out and that’s why he’s the new WBA Heavyweight Champion.