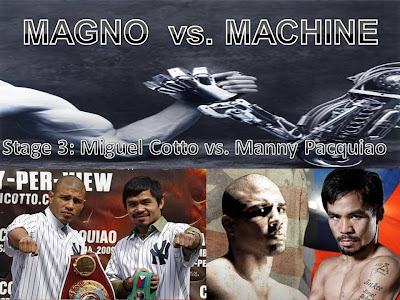 Boxing Tribune editor-in-chief, Paul Magno is looking to edge out in front in his quest to defeat Title Bout Championship Boxing 2.5 in boxing related battle of man vs. machine.

With both camps equal after the opening two stanzas, Magno and Machine will be predicting the outcome of the first superfight of the tightly fought contest, Miguel Cotto vs. Manny Pacquiao.

Can Magno emulate the heroics of John Henry and defeat the machine?

Magno: Even if Cotto can maneuver around all the politics, the contractually implemented cheats and the weight of “history,” he still has to deal with Manny Pacquiao.

Manny represents the type of fighter that has wobbled Cotto most often. He’s a quick-fisted, awkward southpaw who throws punches from all angles.

Plus, Pacquiao carries the swagger of a fighter who knows he deserves super-stardom.

Aside from having a puncher’s chance, Cotto will be in deep waters with nobody there to pull him out. The longer the fight lasts, the more of a chance he has of landing a fight-ending bomb. Unfortunately, I don’t think Cotto will make it into the later rounds…

By hook or by crook, Pacquiao will win. My prediction is Manny via 5th, round TKO.

Machine: Manny Pacquiao might have won titles in seven different divisions, but some might argue that Miguel Cotto will be his toughest test to date.

The Philipino made his name in the golden era of featherweight boxing, defeating hall of fame contenders Erik Morales, Marco Antonio Barrera and Juan Manuel Marquez in thrilling fights. His biggest career win must be against The Face Of Boxing, Oscar De La Hoya, when he retired the legend from the sport.

His opponent is the Puerto Rican phenomenon, and has only one defeat on his record, and that was too a convicted cheat. Starting his career at a 140 pounds, he won the vacant WBO strap against previously unbeaten Kelson Pinto before defending his belt against Randall Bailey and Paulie Malignaggi. He moved up to challenge his countryman, Carlos Quintana, and stopped him in the fifth to become a two-weight world champion. Since then, victories over Zab Judah and Shane Mosley has propelled him into a pound-4-pound fighter.

After watching David slay Goliath last weekend, Pacquiao will surely gain confidence of watching another smaller fighter using his speed and athletic ability, to defeat a dangerous opponent. Frankly, that’s what Pacquiao has to do.

Cotto will have the advantage in power, while Pacquiao will have the speed card over Cotto. With arguably the best tactician in the world in his corner, Roach could prove key to Pacquiao’s victory, once again.

It will be interesting to see how Cotto deals with the speed of Pacquiao early on, and how quickly can he change from defense to attack without getting tagged. Pacquiao’s chin is still to be tested at a higher weight, and if Cotto can land early, he could be able to get the P-4-P king out of there inside the opening rounds.

The questions in this fight will be whether Cotto still has mental scars of his horrific assault by Antonio Margarito over a year ago.

Look for Pacquiao to make a razor fast start, slicing Cotto with every opportunity. Cotto maybe wins one round, but it’s painfully one sided. Pacquiao knocks down Cotto in the seventh and the Rican waves the white flag. Pacquiao the winner by technical knockout in the 7th.