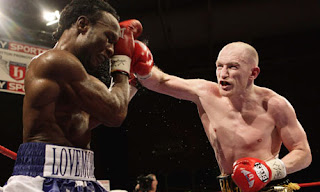 In a decent starter before Pacquiao-Cotto, Matthew Hatton put in his best performance of his up and down career, by drawing with South African Lovemore N’Dou.

N’Dou showed his class in the earlier rounds, opening a cut over Hatton’s eyelid in the second round. The middle rounds were tight, with the Sky team scoring them for Hatton. With no clear indication of a winner, both fighters raised their glove after a gruelling twelfth round.

Hatton’s disappointment came after a tight 12 rounds, which both fighters won clear rounds, but with many evenly fought rounds, the judges declared a draw. Judge John Coyle scored the bout 115-114 to Hatton. Judge Steve Marshall scored the fight 115-114 in favour of N’Dou and judge Tom Marshall, who scored the Haye – Valuev contest at 116-112, scored it 114-114.

Lovemore N’Dou seemed to land the more scoring shots, even though the computer disagreed, with Hatton landing 91 to N’Dou’s 78. The BTBC scored it 114-114.

On the undercard, 24 year old puncher Cello Renda, was stopped in a definite fight of the year contender by journeyman Paul Samuels.

In the opening round of their fight that was pointlessly scheduled for eight, Renda knocked down the in-rushing Samuels with a crisp left hook. Samuels came off the canvas and rocked Renda with hard right hands and eventually won the round.

In an all-action second round, Renda gained the upper hand, landing and throwing more frequently than his older opponent. Then, out of the blue, a boxing rarity happened. A double knockdown! As both fighters traded heavy shots simultaneously, Renda and Samuels fell to the canvas. Renda was up at 5, while Samuels barely beat the count, rising up at 9. Renda put his foot on the throttle, throwing punches left, right and center. He probably punched himself out at this point.

Samuels went for broke in the 3rd, tasting victory against the dangerous Cello. Samuels landed with every punch that was thrown and the helpless Renda was stopped by referee Terry O’Connor. What a fight!