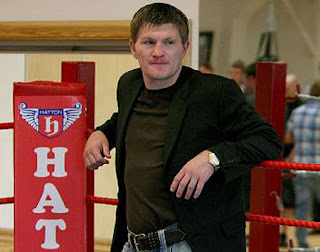 When Ricky Hatton was laid flat, by a left hook in his second-round knockout loss against Manny Pacquiao in May, few people thought that Hatton would fight at world level ever again.

Even the Brit hinted on many occasions that his arm chair was calling, but in a new twist, Hatton “has felt the buzz” from seeing his promoted fighters win over the past months.

A fight against his friend Amir Khan has caught the imaginations of some British fans in dreamland, but it seems ever more likely that ‘The Hitman’ will fight Mexican Juan Manuel Marquez in a true crossroads bout.

Marquez recently moved up two weight classes as he challenged Floyd Mayweather Jr. but struggled to win a round against the five weight world champion in September. Mayweather has also stopped Ricky Hatton in the tenth round.

Both fighters are said to be interested in the fight, and have begun talks to fight in Hatton’s hometown of Manchester. No date has been discussed and they’re most likely to meet at the light welterweight limit of 140 pounds.

Is this a fight for the fans or promoters? And is there any hope for Hatton? Discuss…