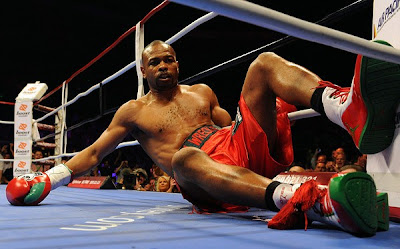 I read something yesterday that made me laugh, and made me cringe at the same time. A fight writer stated that Roy Jones’ first round knockout at the hands of Danny Green may affect his 2010 rematch with Bernard Hopkins. May affect the bout? Is there something I’m missing here?

We all know how fighters are. In most cases they refuse to hang up the gloves when they should, and in some of those cases our iron clad heroes become human jelly fish, a sad result of a passion only a select few possess. This could very well be the case with Jones, who ironically took little risk during his prime and was open about his fears of risking his health, but now, at the tail end of his career has chose to fight on despite his diminished skills and reflexes, despite the fact that he’d been KO’d twice in stunning fashion and nearly stopped by Antonio Tarver in their third bout a few years back. He hasn’t had a significant win since.

I’m the biggest Jones fan there is. I’ve followed his career since the Olympics and like many, was awed by his speed, reflexes and natural ability. If I wasn’t blowing off a night out with the guys to stay home and watch Roy fight, then I was out at the bar with those same friends watching him. Hell, I braved an all Italian pub to watch the Pazienza fight and held my tongue most of the night (but waltzed out with quite a smirk afterwards).

Despite my loyalty, I’m hoping like many that Roy chooses to hang ‘em up and ride off into the sunset a healthy and financially secure man. There’s nothing left to prove and a fight with Hopkins won’t prove anything for either fighter. In fact, fans should be offended if Hopkins even entertains the thought of making this fight. Beating up on the shell of a shell of what was the best pound for pound fighter in the world 13 years ago won’t mean a thing.

So Roy, as a loyal fan and follower I’m asking you as I’m sure many others are, to call it a day. You were the best of your era and some may argue one of the best ever. We won’t forget the flash you brought to the ring but what we don’t want to see is our modern day hero impaired, or much worse.