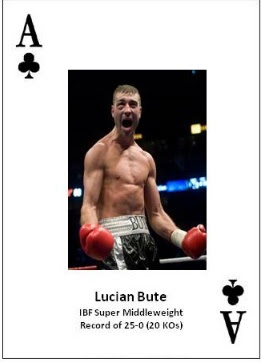 Firstly, we estimate that Bute’s goal is to get pound-4-pound status or to set himself up to fight the winner of the Super 6 Boxing Classic. We then looked at who’s called out Bute, who’s in the Super 6 and who Bute needs to get his pound-4-pound ranking.

Allan Green: The American has never quite lived up to his knockout of the year winner in 2007 when he smashed previously unbeaten Jaidon Codrington to sleep in sixteen seconds. Since then, the only world class performance has been his dismantling of never great Carlos De Leon Jr. With Green being nurtured nicely by Showtime, it came as a shock to everyone that he wasn’t included in the Super 6 Boxing Classic. But maybe he wasn’t ready, or even good enough for that matter, as Ward and Dirrell have more than held their own against the big boys. Could this be Green’s turn? Could he upset the odds and take Bute’s belt as extra luggage? It would set Bute in a nice position if he beats Green, who has looked poor in his recent 10 round bout. Possibly, a wise move.

Kelly Pavlik: The reigning undisputed middleweight champion has done nothing much since dropping a lop-sided defeat to old Bernard Hopkins. With a stoppage win over Marco Antonio Rubio and another one over Miguel Espino coming up, Pavlik might need a gut check to get back on track. And who better than Lucian Bute to give Pavlik the motivation and the wake-up call that he desperately craves. With the Williams negotiation stalling, and a reoccurring staph infection resulting in pull-out clauses, both Americans are likely to avoid each other next year. Just imagine how nasty the negotiations between Bute and Pavlik would be! Bute would want it in Canada, Pavlik would want it in Atlantic City. Both would demand over half the cut and we could be left with Pavlik-Espino II. Pavlik is vulnerable at the moment and a perfect catch for Team Bute.

Adrian Diaconu: An all-action Romanian who is loved by his adopted nation of Canada. Sounds familiar!? Yes, Bute and Diaconu sell stadiums in Canada and would serve up a treat for the Canadians. Diaconu was outpointed against Jean Pascal earlier this year in a great bout, but his reputation wasn’t damaged by the defeat. It most probably grew as the hooks were slugged in. The only thing is that his “0” has gone. But it was only a matter of time if he wanted to be taken seriously at world level. Bute and Diaconu would be a marketing success in Canada, and the fight would be something the public would relish. However, with Diaconu’s title now with Pascal, a Canadian, it might turn Bute’s head toward ‘The Mongoose’. Looks a decent fight at light heavyweight.

Jean Pascal: As stated above, Pascal has a title. He’s Canadian. He sells stadiums. He’s exciting and he talks. Marketing heaven for Bute, but a much tougher fight than Diaconu, but with more reward at the end. If Froch can outbox Pascal, I would imagine that Bute can do the same thing. Now position yourself in the Super 6 Boxing Classic winner’s shoes; your invincible and there’s a two-weight undefeated world champion and a one handed middleweight champion to add to your record. So Pascal would enhance Bute’s reputation, but what are the chances that Pascal uses his brain in the fight and gives Bute a skill set contest. It will be an even tougher fight for Bute, with Pascal a quick and powerful fighter but not the most agile. A great fight for the fans. 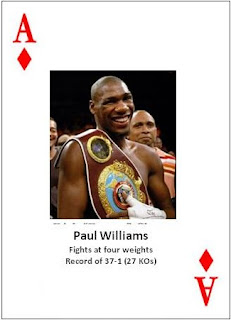 ms is a great fighter, maybe a bigger Manny Pacquiao, but he’s had a hard time recently because of the danger he possesses to the front-men of the Welterweights and Middleweights. Taking that Williams defeats Martinez this Saturday, and Pavlik avoiding Williams at any cost, a fight with Bute might be Williams’ only reliable option. But the chances of him winning are small, as Williams’ skills are greater than Bute. Everything Bute does, Williams does better. Nobody knows how good Williams will be at 168 pounds, so if he loses an asset, Bute might capitalize and punish the ‘Punisher’. If Bute does emerge victorious over Williams, his reputation would be huge inside the underground of boxing. He would be considered as the best non-welterweight on the planet. I’m getting ahead of myself here, but the reward is massive. Be careful what you wish for, Bute.

The Boxing Tribune Pathway Too Success: Firstly, avoid anything to do with the Super 6 Boxing Classic as a late replacement. It would mess up Bute’s freedom and plans, and the chances of him qualifying would be very little anyway as the other fighters would already have points on the table. So to enhance Bute’s bank account, a fight with Jean Pascal would be a good start to 2010. If Bute was very successful, a move back south to fight Kelly Pavlik in a winnable bout with a victory ensuring Bute a P-4-P spot, and finally, to wait for the Super 6 winner, another easy seven figure salary by out-boxing Adrian Diaconu in Canada.