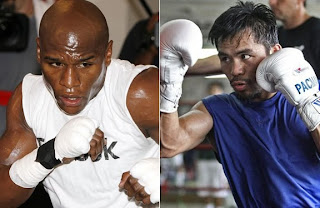 Mayweather had already agreed…the ball was in Pacquiao’s court. Bob Arum flew to the Philippines for Pacquiao’s ok…and, apparently, he got it!

According to sources who’ve spoken directly to Arum, Pacquiao has agreed to terms on a March 13th bout with Floyd Mayweather Jr.. Some minor details need to be ironed out, but the heavy lifting is over.

Barring some unforeseen circumstance, the official announcement will be made next week.

Most fans and experts feared a long, nasty and frustrating negotiation process, but if Arum is on the level, this went surprisingly easy.

According to other sources: The money split is 50/50 and this will not be a catchweight encounter; The bout will be made within the boundaries of the Welterweight division…

Details regarding the venue are still being explored, although the leading candidates are: Dallas Cowboys Stadium and the MGM Grand in Las Vegas.