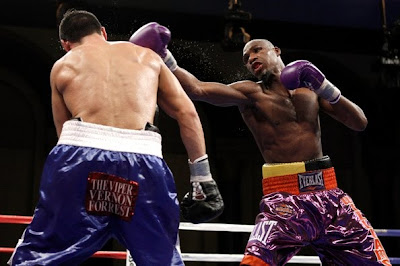 Paul Williams is the type of boxer that fans are always begging for; A tough, highly-skilled fighter who will fight anyone, anywhere and will always put in an honest, exciting effort regardless of the opponent.

There’s not an ounce of dog in “The Punisher” and nobody can ever accuse him of playing it safe with his opponent selection. Williams is just a soft-spoken punching machine who will fight any opponent in any division.

He should be selling out every seat wherever he fights. He is precisely what every hardcore boxing fan wishes for when they go up and down the rankings and complain about the sad state of the sport today.

Yet, Paul Williams is not a draw; He doesn’t bring big numbers to HBO and he doesn’t put asses in seats…and that’s a real shame and a damn fine mystery to explore.

After all, its not like he’s without his connections. He has Al Haymon representing him and Haymon has a direct line to HBO and, seemingly, carte blanche to air what he pleases on HBO World Championship Boxing and Boxing After Dark. The same pit bull pushing Floyd Mayweather into eight-figure paydays is behind Paul Williams, yet Williams has a hard time even filling the first dozen rows of his fights or attracting a rating higher than a 2.0.

Looking over his recent resume, his only less-than-scintillating performance was against Winky Wright and the lack of intrigue in that one had nothing at all to do with Paul Williams’ effort as he hurled punches in bunches at a defense-minded Wright.

And if there was need for further proof of Williams’ entertainment value, Saturday’s war with Sergio Martinez should’ve erased all doubt as to his ability to thrill even the most casual of fan.

In a candidate for Fight of the Year, Williams and Sergio Martinez went at it with a ferocity that bordered on frenzy at times, but despite the buzz that surrounds a quality fight, this one will ultimately result in a sigh of disbelief and a shrugging of the shoulders as we read the Nielsen television ratings report. This gorgeously chaotic war will undoubtedly draw lower ratings than next week’s peck and paw rematch of Juan Diaz and Paulie Malignaggi.

So, why can’t a fighter, proven to be entertaining and a representative of all things boxing fans claim to want, attract the proper amount of attention?

Some will point to the big fighters’ unwillingness to fight Williams and the resulting necessity to fight trickier, lesser-known opponents in order to make a living. That could be a solid reason, but it’s not like Williams has been fighting The Contender alumni at club shows in Minnesota. Williams has fought guys like Margarito, Quintana, Phillips, Wright and Martinez on the nation’s premier boxing network. Lesser fighters have achieved greater glory with weaker opposition.

A darker reason for Williams’ inability to draw relative to his ability is racial in nature. I’ve said it a couple of times on our forum (www.thebtbc.com), but I feel that if Williams were Latino, he’d be a major star right now. The shadow of race and nationality is still a factor in the sport, more so than some would like to believe. Mexicans tend to throw their support behind Mexican fighters, Puerto Ricans support Puerto Rican fighters, African Americans support African American fighters, etc. As a result, Williams is only getting full support from a fraction of the available fan base and simply being ignored by the more vocal and fanatical Latino community.

The most pessimistic of the reasons behind Williams’ lack of star power is perhaps the most bitter pill to swallow. Maybe the fans, despite their cries to the contrary, simply don’t care about entertaining, brave warriors who step softly into battle. Maybe they simply like who they like, based on personality or background, and couldn’t care less about anything else.

Whatever the reason, Williams is a special kind of fighter and he deserves to be seen by a much wider audience. Hopefully the buzz around the Martinez bout will fix that. If not, take all fight fans’ whines about wanting a re-emergence of old-school fighters with a huge grain of salt…they’re not telling the truth.