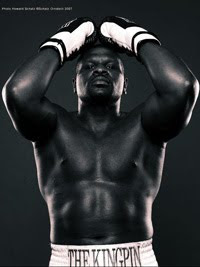 When David Haye finally claimed a heavyweight title, defeating sloppy titlist Nikolay Valuev, the Heavyweight began its first cosmetic surgery since the beginning of the decade.

Haye know holds a market share at the top of the heavyweight division, and soon, surely, a title shot at Vitali Klitschko must be around the corner. He first defends against John Ruiz, then surely Vitali Klitschko could free up his schedule.

Dr Ironfist fights on Saturday, against Kevin Johnson, an American that possess a potent jab that could trouble the ever-aging Klitschko. He has a padded record that doesn’t really scream out worthy contender, but he has a nature that could trouble Vitali in the ring.

Juan Carlos Gomez won the first two rounds against Klitschko, out-jabbing the Ukrainian to set up straight right hands. The differences between Gomez and Johnson are obvious. Gomez is a southpaw and a former Cruiserweight champion, while Johnson is a righty, weighs in at around 240 pounds, but stands around the same height.

Kingpin has a visible stinging right hand that stops many surging attackers in their tracks. It’s not one-punch knockout power, but has enough power to earn respect, especially against a consummate safety first professional such as Vitali.

His jab however, is his weapon. He has a much better jab than Gomez, a jab that could even challenge the two jabbing kings, the Klitschko brothers. It’s the catalyst to the right hand, which is basically his only attacking shot. He might not need any other shots, just a couple of angles that would confuse Vitali and make him re-think.

Vitali has been very impressive in his recent contests, if you can really call them contests as there was nothing competitive about them, but something tells me that it’s only a matter of time before he meets someone with the passion and hunger for the sport.

Could Johnson be the guy to de-thrown him? The time is now for a change at the top of the division, with maybe two new titlists before the turn of the year. Johnson is the underdog, he might not even be a live one, but at heavyweight it only takes one punch. Does Johnson have that Rachman style punch in him? Don’t put your house on it, but we might have a major upset on the cards on December 12.