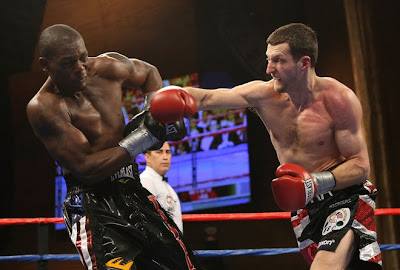 2009 has been a magnificent year for British boxing, with three recognized belt holders and many up and coming prospects making the step from domestic to the European scene.

British boxing froze midway through 2008 and somebody came along to press the F5 button that all stream-watchers have pressed countless times during the past 12 months. It gave British boxing, and the live stream, a refresh. We had a makeover, a transformation and many passing of torches.

Joe Calzaghe retired, and opened the door to Carl Froch. The first major passing of the torch in British boxing over the course of the year. Froch won the WBC Super Middleweight title in a scrap against Jean Pascal, before travelling to the States to stop Jermain Taylor late, and defending his title for the second time in the Super 6 Boxing Classic tournament, against Andre Dirrell, winning via close split decision.

Ricky Hatton’s retirement is inevitable. He might come back to be stopped by either Marquez or Cotto in a one sided affair, but he will leave a fan-base behind. Ricky Hatton passed his smouldering flame to King Amir Khan, who went 3-0 with wins over a one-eyed Marco Antonio Barrera, former paper champion Andreas Kotelnik and previously unbeaten Dimitry Salita.

David Haye took a year to become a heavyweight titleholder. He’s not however the champion of the world, as he defeated lumpy Nikolay Valuev, not Wladmir Klitschko. His unprofessionalism has been uninspiring, and comparisons with Ali are over-exaggerated to the extreme.

So we have three world champions in the space of 12 months. Not bad you say. With Ricky Hatton and Joe Calzaghe pushing into promotions, British boxing hasn’t quite lost its icons from the decade.

Retirement beckons for Junior Witter, who might have been a quitter when he was out-hustled by Devon Alexander. He moves up to welterweight, for no reason. Clinton Woods made a smart move by retiring after being out-pointed by Tavoris Cloud in a credible display from the Sheffield fighter. Cloud saw Woods as a stepping stone, and to be frank, that’s what he was.

Who do we have replacing them at the depths of the lower part of British boxing? We have undefeated slickster Kell Brook, who is as smooth as you like. His performances have been exceptional so far, but few doubt that he could make the big jump to world honours in 2010. Patience is a virtue, I say.

Kevin Mitchell showed that he belonged at world level with his tap dance around Colombian slugger Breidis Prescott on the Khan-Salita undercard. He could challenge for a world title at junior lightweight or lightweight, most likely at lightweight. The money is there against big names such as Jorge Barrios and Michael Katsidis, where Roman Martinez and Ricky Burns aren’t quite the money dealers.

He could face John Murray in a WBO eliminator, a Mancunian lightweight who’s had an up and down 2009. Another unbeaten fighter who defeated Jon Thaxton, Lee McAllister and Scott Lawton in a domestic level 2009. He challenges Anthony Mezaache for the Frenchman’s European belt.

Ricky Burns is likely to challenge for Martinez’ WBO crown in the latter stages of 2010. Martinez won the belt by defeating Nicky Cook in a brawl at Manchester. The Puerto Rican might be a step too far for Burns, but I wouldn’t write him off just yet.

The ‘New Joe Calzaghe’ Nathan Cleverly travels to Italy in search of the European title against a post-prime Antonio Brancalion. The judges won’t be on Cleverly’s side, so he might need to let his fists do the talking by stopping the veteran in the square circle.

Rendall Munroe defeated Simone Maludrottu in an exciting battle for the former binman. The Leicester super bantamweight has regained his status as British Boxing’s Balboa, as Martin Rogan’s cab life stole the show. Munroe could challenge Toshiaki Nishioka for the WBC belt.

Matthew Macklin wants to face Kelly Pavlik in 2010. Good luck to him, as I don’t think he can pull it off. Another one from Hatton’s stable who could rise to the dizzy heights of 160 pounds next year. However, he could be distracted by Jamie Moore’s trek to middleweight.

Ryan Rhodes defeated Moore in a war of all wars. Rhodes stopped the weight drained Salford fighter to capture the European belt. He’s in line to be mandatory for Sergio Gabriel Martinez, but a wise move from Team Rhodes would be to stay at the European scene.

Quick recap on the heavyweight scene. Sam Sexton might be the next best thing to David Haye if he could defeat an evergreen Danny Williams. Tyson Fury keeps on amazing the media, with his mouth. Jon McDermott keeps on getting bad decisions. And Audley Harrison has a dream.

Prizefighter keeps on expanding. Gavin Rees, Tony Oakey and Audley Harrison may have re-directed their career paths after winning the three round all-out action tournament.

Stateside, Craig McEwan’s stock keeps rising under the watchful eye of the Golden Boy. Ola Afolabi might need to stay under the wing of Freddie Roach if he wants another Cruiserweight title shot. Many Celtic fighters have made the pilgrimage to the Wild Card Gym, few have been successful.

Darren Barker is still undefeated but needs to take another step up if he wants to be taken seriously. Martin Lindsay could fight Jamie Arthur in what would be a great scrap at 126 pounds. Paul McCloskey needs a big name on his resume, could Gavin Rees be what he’s looking for? And Anthony Small won a fight by throwing just over a 100 punches. Could he be next for Rhodes? Watch out for Chris Evangelou, a Calzaghe prospect who’s attracted interest across the pond. He may be the next big thing.

The Boxing Tribune’s British Fighter of the Year: Carl Froch

The Nottingham fighter has simply been flying the flag solo for Britain over in America, stopping American fighter Jermain Taylor and outpointing their next superstar Andre Dirrell to make his name in the US. His inclusion in the Super 6 Boxing Classic has showed that he’s willing to put it all on the line against the great fighters around him, and he will face Mikkel Kessler next in a tough trip to Copenhagen. His quotes have been enticing, his fights have been gripping, his career might just be beginning.