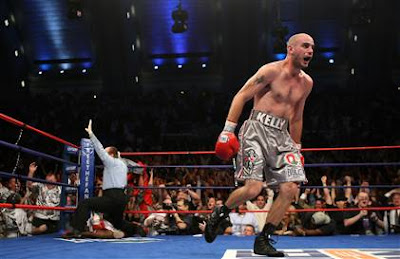 With Arthur Abraham exiting the division, it was hard to see how lineal middleweight champion Kelly Pavlik would find a credible opponent to share the same ring at 160 pounds. Especially after the grand plans of Top Rank were quickly scrapped and re-mapped following Bernard Hopkins’ magical performance. But he wasn’t dethroned, or stripped of his titles, he is still the champion of the world. But his plans have still changed dramatically.

Before the defeat, the health of the division was in the good hands of Pavlik, who entertained everyone in his two fights with Jermain Taylor. His burning desire to succeed and willingness to impress his fanbase has made him a big attraction in the States. But over twelve dreadfully long months, Pavlik has received as much abuse from the internet trolls than Antonio Margarito received with his plaster saga. These very inconsiderate trolls couldn’t care less when Pavlik explained why, how and when he can or cannot fight again. He pulled out of three fights, as a result of a staph infection. Trust me, it’s painful. This is not some pansy excuse. He failed a medical, and when you fail a medical you can’t fight. Yes, he did pass a medical late October when he agreed to fight on December 5, but sparring with an 80% fit hand is not the best idea when you’re preparing for a mighty challenge of one of the most uncomfortable fighters on the planet.

The point that has enraged most fight fans is his re-scheduled fight with Miguel Espino. After pulling out of the December 5 card, he decided that he could return two weeks after his cancellation. His excuse is that he fought Espino at 90% fitness. I believe him. Maybe I’m naive, but hey, whatyagonnado? The only way he can collect these fans on his bandwagon is by fighting Paul Williams.

Moving on from the two talented Americans, the only ones in the division, Felix Sturm had a slight dip in form, scraping the barrel in a decision over Khoren Gevor, another fighter with decent names on his resume, even if they’re on the wrong side. Sturm’s now with Roach, could that be a beautiful partnership in the making? We all want Sturm to fight someone of worth for once, where he actually risks something, but we all know that we’re dreaming.

Another German titleholder, Sebastian Sylvester, makes for very good action, draws decent crowds in Germany, and is two or three or 17 levels below Pavlik and Williams in talent. He is a puncher though, even if his record suggests otherwise, and a puncher is always a live underdog in a title fight.

Anthony Mundine is just odd. He’s a decent boxer, but a delusional one nonetheless. He was very, very lucky in his decision over fierce rival Daniel Geale, one that really could’ve gone either way, or Geale’s way to put it blunt. He’s now moving down south in hopefully a short trip to junior middleweight, before agreeing to fight Geale in a rematch. It should draw a big crowd down under in the rematch of Australia’s Fight of the Year.

Matthew Macklin has had a great year, emerging out of the darkness and into the minor spot of limelight that Ricky Hatton allows him to have on his promotional campaign. He voiced his views on a Pavlik fight, but seriously, I think he’ll have to wait until deep into 2011 before any shot at Pavlik. He should capture the European trinket in February, before leaping onto the world stage.

Then you’ve got your prospects. Four very good undefeated fighters that are ready to move up another gear and maybe, just maybe, ready for a challenge against a big name fighter. Daniel Jacobs showed his tools against Ishe Smith on the controversy-free night at Houston. Hassan N’Dam N’Jikam has just been playing with the opponents put in front of him and his ring entrances have been of the same degree as Prince Naseem. Gennady Golovkin carries punching power in abundance as he has stopped 15 out of his 17 opponents. Finally, Sebastian Zbik has the talent, but maybe not the brawn to make it to the top.

All the prospects have got good promoters that will choose the trouble-free path without a scare in sight. But could they bump into each other on their travels? Imagine if the four collide in a mini-tournament, maybe as eliminators for some WBZ title that must be around somewhere. Again, I need to get off the glue.

Get your hard hats on, we’re going underground. Billy Lyel is now one of the most feared stepping stone for a promoter in the weight class. He somehow, I still don’t know how, defeated John Duddy and then went on a three fight winning streak! Unbelievable! Craig McEwan is another undefeated prospect that has quick rising stock. Promoted by Golden Boy, the Scot needs to develop a better form of attack before stepping into the ring against the level of Jacobs’ opponents. Dmitry Pirog, Macklin’s next opponent, is touted as the Russian answer to Tyson. I’m not sure if they know that Tyson was about 75 pounds heavier than Pirog in Russia, but he must be another flash in the pan fighter if someone compares him to Tyson. Roman Karmazin will make a return onto American TV, in another humdinger fight. Emmanuel Steward needs to get his magic hat on if he wants transform Andy Lee into a good boxer. When you watch Lee, you wouldn’t say they’ve been working on defence in the gym. David Lopez, please fight more often. Darren Barker, please fight better opponents.

Ronald Wright has been one of the great fighters of the current decade, and it’s sad to see him struggle and underpaid. Another fighter that has defined the decade and defeated many greats of the decade. He could easily be in the top 10 middleweights, but who would want to fight him? Who would risk it all against smart Winky? Paul Williams, that’s who.

Summary: Pavlik pulled out of three fights this year, two with Paul Williams and one with Sergio Mora. His reputation has taken a battering this year, and his soft touch of opponents didn’t help his cause at all. He is streets ahead at 160 pounds at the moment, but all could change if Paul Williams challenges him. Has a wide range of options, ranging from Bute to Sturm to Williams. Could take back his position at P-4-P in 2010.

Summary: Felix Sturm just holds onto his #2 position, by the skin of his teeth with a very dodgy decision against Gevor. Williams is right behind the German now, who’s been living off the De La Hoya defeat for the most of his career. Has now moved to the Wildcard Gym with Freddie Roach, but can he turn back the years to find his previous form to keep his place next year?

Summary: Probably the best fighter in the division, definitely the boxer with most potential, Williams has made a brave but clever choice in settling down at 160 pounds with a comfortable victory over once-great Winky Wright. He struggled with Martinez’ movement in the opening exchanges, but eventually came out tops in a great fight. Big things are expected from ‘The Punisher’ in 2010, including a high ranking in BTBC’s P-4-P.

Summary: After being nearly shutout by Sturm in 2008, Sylvester recovered with a superb knockout of Nespro, before frying bigger fish in the durable Simon, and finishing with a hotly disputed split decision win over Lorenzo. The most hunted down titlist in the modern game, Sylvester has been called out by over half of the division’s top 10. A Lorenzo rematch is in place.

Summary: One of the wackiest characters in the sport, Mundine put in a great performance against Geale to earn the right to call himself Australia’s #1 middleweight. He rejected a rematch because he thought he wouldn’t make 160 pounds because he loved chocolate so much, but then bizarrely signs to fight six pounds lighter against another Aussie in Medley. Might be out of the rankings next year if he campaigns at junior middleweight.

Summary: Macklin busted onto the middleweight scene with a crushing kayo over Finish hero Asikainen in a superb showing from the Birmingham fighter. Nearly stopped Uruguayan Pintos in the final round of their ‘contest’, and a stoppage of Elcock crowns off the year. He’s much better than domestic level, maybe much better than European, but is world honours too much to ask for?

Summary: He was disgusted by the verdict in July as he felt he was robbed against Sturm. Sturm’s greater activity might have swayed it his way, with Gevor landing the much cleaner punches on the inside. He is still in the hunt at middleweight, but needs to start winning against the elite to be taken really seriously at world level.

Summary: Was on the wrong end of a split decision against rival Mundine, but the Australian public know that Mundine doesn’t want one piece of Geale again. Geale is struggling to find a worthy opponent, and he has been one of the hundreds that have publicly called out Sylvester. Overlooked by many matchmakers as he’s a dangerous operator.

Summary: N’Jikam is a showman. He’s really talented and definitely a force at a very early stage in his career. He’s always a step ahead of his fellow prospects Zbik and Jacobs, even if they have better promotional campaigns and organization links. Talent wise, N’Jikam might just edge the others out. Breathing down Geale’s neck for the #8 spot, but a step up in class needed.

Summary: Another prospect under the Sauerland branch, Zbik is a boxer that might struggle to get past European level on the basis of his last performance. Not because it was a split decision, 115-113 Della Rosa was as bad as 119-109 Williams, he didn’t let his hands go against a bloodied Della Rosa. As he has faced the greater opposition on a more consistent basis, he squeezes past Jacobs into #10.