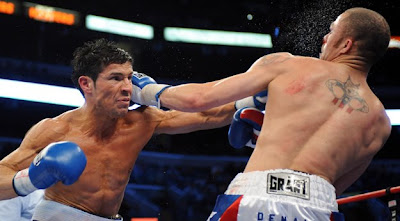 Last year there was hope. This year, there’s self-pity.

The revolving door at 154 pounds continues to revolve, with the likes of Paul Williams and Sergio Mora moving up to middleweight, and the star-studded names such as Shane Mosley and Oscar De La Hoya have either headed down south or retired. Their replacements were hardly a fair trade. Although Carlos Quintana and Joshua Clottey are great technicians, they are hardly Pay-Per-View fighters. Quintana and Clottey are suppose to come up from welterweight, but who knows in the current fight game. Unfortunately, so far, Kermit Cintron, hasn’t exactly created the predicted splash, which is impressive if you’re a platform diver, but not in any other sport. The Puerto Rican promised a big showing, but we received a lacklustre play instead.

The death of Vernon Forrest has left the division reeling, with the older, wiser gentlemen at the upper half of the ratings taking time off to reflect on their careers. “The Viper’s” death scarred the year, alongside legends Alexis Arguello and Arturo Gatti, and respected fighter Marco Nazareth, who all passed away in a July 2009.

One of the fighters that’s took a break from the ring is Ukranian lefty Sergiy Dzinziruk. Another talented fighter from the Eastern bloc, Dzinzurik recently split with promotion outfit, Universum Box for failing to land him a fight with a desperate Paul Williams. Should return for a successful 2010, quite possibly with new promoter, Top Rank, but who would want to risk their winning streak if the WBO strip his title?

Another lazy fighter, both in the ring and outside, Verno Phillips has most probably waved goodbye to the sport with a healthy payday, following his battering from Paul Williams last year. If he does return, he has a #3 ranking waiting for him, but my patience is running low as the stars of tomorrow are cutting into the bottom half.

Now an established boxer, with two showings on HBO which he received a massive increase in stock, Sergio Gabriel Martinez has had either a brilliant or an awful 2010. It depends if he’s an optimist or a pessimist. On one hand, he produced two outstanding performances, executing the correct strategy that was needed to come away with victory. Plus, two career high paydays, a possible rematch with Paul Williams, and another showing on HBO just adds to the pleasure of 2010. But, he was badly robbed against Kermit Cintron, outlasted by a dogged Paul Williams, and has probably lost his WBC title. Does it balance out to be an above average year?

IBF titleholder Cory Spinks survived an early scare against Deandre Latimore in their hometown clash, after being knocked down and dropping the opening third of the bout to the St Louis fighter. Still, Spinks made a comeback, snatching the decision from Latimore in an oddly scored split decision verdict. His once-decent reflexes have slowed down so much, even big old Ray Austin can flick out that jab at a faster speed. Vulnerable at the top, and a rematch with Phillips must see his title go away, surely?

After puzzling most by backing feather fisted rabbi-in-the-making Yuri Foreman over the powerful WBA titleholder Daniel Santos, Foreman produced a faultless performance, even knocking Santos down during the contest. Santos might have been ring rusty and absolutely bored shitless as he stood there in front of a Puerto Rican crowd, Foreman managed to even get Bob Arum to mention his cash cow Manny Pacquiao in a potential match-up. Now why in this world would you pick Yuri Foreman, a fighter who doesn’t know if hails from Israel, Belarus or America, over Floyd Mayweather Jr. Shane Mosley and even Joshua Clottey, fighters that would enhance his reputation even further. I’m fed up of this x number of titles in y number of weight classes, there must be a limit.

Alfredo Angulo received a fight too soon against Cintron, even though Cintron allowed him to win 4 rounds so that he didn’t gas in the end. He’s still a crowd pleasing fighter that will be featured on many undercards against club fighters that live off their great grandfather’s name, but can he be a world champion. If he is going to win an alphabet title, it’s going to be at junior middleweight.

To Britain, where Ryan Rhodes produced a stunning knockout against Jamie Moore, in probably the only competitive European title fight this year. After gritting his teeth, digging very deep, Rhodes managed to weather the early storm from Moore to take him out in the seventh. Is now on the world stage, but does he really want to be there?

Back to Prospectville, where Vanes Martirosyan has done enough to get into my good books to earn the final slot on my top 10. The Armenian born fighter has been given his toughest task to date against a durable, but rather fragile Kassim Ouma to open a new series Fox Sports Net. Does Martirosyan have a defect to be exposed?

James Kirkland looks set to get back into action in 2010 following his imprisonment. He will be immediately entered into my rankings with a win over a tomato can. The return of Kirkland can only help the health of the division, as the makeover continues at light middleweight.

Jamie Moore looks very likely to move up to middleweight, while Joachim Alcine will stay at 154 pounds as he’s got himself in the frame for another title shot with a victory over Christophe Canclaux. Anthony Small might challenge Ryan Rhodes for the European title, with the hope of getting himself on the world scene. Puerto Rican Daniel Santos can’t be bothered to get back into decent condition. Julio Cesar Chavez Jr. keeps on moving up in weight, but the Mexican failed a drugs test following his victory over club fighter Troy Rowland. Cornelious Bundrage and Joel Julio might be set for a rematch in 2010.

Now that the slouches have gone even lazier, its time for the division to liven up, big time. Expect a shift in power next year, with Angulo, Latimore and Martirosyan finding their feet at world level, and eliminating viruses such as Spinks and Phillips down the food chain.

Summary: It’s a mystery how a fighter can go to #1 and stay at the top with a record of 0-1-1, and if Dzinzurik had won a fight in 2009, he would edge Martinez at the top. I count Martinez’s draw with Cintron as a victory though, and as the division has been very quiet at the top, I think he deserves praise for his performance against Williams. That’s why he’s #1.

Summary: The talented Dzinzurik hasn’t fought since his split with Universum, which is a real shame as it’s very hard to gage his abilities as he’s got a habit of beating an opponent before or after he makes a name for himself. I hope he gets back into action soon, and a fight with Martinez is something I would want to see.

Summary: Another fighter that’s put his legs up for 2009 and plan his pension plan. Might be tempted to return against Spinks in a rematch of their close encounter in 2008, where Phillips emerged victorious.

Summary: Cory Spinks is boring. Well, not actually. The slower Spinks gets, the more entertaining his fights have become. But still, it’s hardly gripping viewing. The defensive demon has also been a quiet figure through 2009, but there must be an unification fight on the horizon.

Summary: I wouldn’t say I’m a fan of Cintron, but I like the way he milks the bad boy image that’s being portrayed by the media, even more so after his stinking performance against Sergio Gabriel Martinez in February, and in handing heavily hyped crowd pleaser Alfredo Angulo his first professional defeat. Could Yuri Foreman be next?

Summary: When I was asked to describe Yuri Foreman, I called him a classier Sergio Mora. He has the hand speed and average power, but has the slipperiness that the ‘Latin Snake’ possesses, but without the lateral movement. Foreman could land a dream ticket with a fight with Manny Pacquiao, but who in their right minds would prefer to watch Foreman in that ring over Floyd Mayweather?

Summary: Latimore had positioned himself perfectly after 4 rounds of his bout with Spinks for the vacant IBF title, before a second half collapse saw him buckle under the pressure of the big stage to a disappointing split decision defeat in his hometown of St Louis. As fighters around him have lost to worse fighters than Spinks, Latimore has kept on climbing up the ladder and is approaching the top half if this stupid inactivity business continues.

Summary: You might think I’m biased because I’m from the same island as Rhodes, and that he would no way beat Angulo or Martirosyan. I would agree that he’s not the most talented of the bunch, but Rhodes’ display of grit and patience saw him emerge victorious in a war against Jamie Moore, who was positioned #8. It was a straight swap. Rhodes should defend his European belt against tomato cans, which in my opinion, would be an excellent call from the Englishman.

Summary: There’s no doubting that Angulo is a beast, but I have my suspicions if Angulo can cut it at the highest level. His camp claimed he had flu symptoms during the Cintron fight, which might explain his lethargic performance, but the Mexican needs to work on his hand speed and footwork if he wants to make that step onto the world stage next year.

Summary: The only fighter to have a scheduled fight for next year, Martirosyan is quickly coming a star with impressive performances on various undercards dotted around the States. Has his toughest challenge to date in Ouma to kick off the FOX Sports Net series, but expect the Armenian born fighter to come through in another scintillating display.