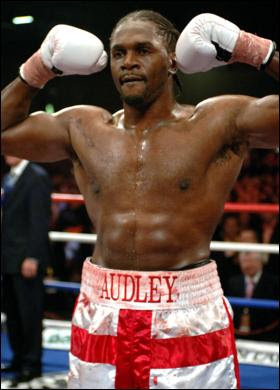 After reading the title, your imagination must have travelled far far away. Maybe to Germany against a Klitschko brother, or in London, against David Haye in an all-British contest, before I quickly bring you back down to earth. However misleading the title might sound, there is still an element of truth to the fact, that Audley Harrison, might give boxing its much needed kick up the backside in its battle to eliminate greedy insiders.

Make no mistake about it, I don’t think the ‘A-Force’ will get past Albert Sosnowski in February, without even bothering considering him against someone as talented as Haye, Vitali and Wiladmir. But he still has his dream. The dream of becoming Heavyweight Champion of the World. Dream on Audley, dream on.

Nine years ago, Harrison won Gold at the Sydney Olympics, a major feat. He had a perfect platform to elevate himself into the professional game. He had millions of money-grabbing, but clever promoters, begging for his services. But Audley being Audley, decided to take the journey alone. Was this the first wrong turn on his journey to the top?

BBC threw money at Harrison, naively letting himself match-up against tomato cans and American bums. Harrison earned a $1 million for 10 fights, that frankly, you and me would have had the chance to cave through 10-0.

The choice of route Harrison took was questionable to say the least. It was like he chose a back road over a dual carriageway that lead to a motorway. Instead of going through the original domestic level, he tried to quickly skip past it break America by fighting in Britain, but by boxing questionable American opponents. For an uber-prospect, it immediately drops your stock and raises the number of haters on forums. The names ‘Fraudley’ and ‘A-Farce’ probably came to his own billing.

The BBC told him that he needed to drastically step up in quality of opponents, and fight a couple of domestic fighters. So, he did… fight one domestic fighter. He stopped Matthew Ellis in two rounds. He then dropped back to his usual foreign club fighters and went on to capture the utterly pointless WBF title, which was the final straw for the BBC, who figured out it was another cover up to fight over-matched opposition.

They pulled the plug on the contract, and ultimately left Harrison in the dark. Without a promoter, Harrison struggled to get himself on a fight card, especially after bad-mouthing every promoter for their injustice of fighters.

Moving across the pond saw him battle to two trouble-free stoppage victories, before Danny Williams began abusing Harrison in the most aggressive trash talk we’re ever likely to see at domestic level. Harrison rose to the challenge as it was an opportunity to get back into British fans’ hearts. Harrison signed with Warren, something he truly regrets as a fighter and a person. The rivalry was already steaming, before a hotly disputed split decision saw Harrison’s fall from grace begin. His first career defeat would spark a different promoting strategy or a split with Warren, surely?

A rematch with Williams beckoned, but the dreaded tune-up fight to warm up the pallet. Both fighters were unsuccessful, Harrison suffering a points defeat to Domininck Guinn and Williams dropping his Commonwealth belt to Matt Skelton in an even uglier contest. Thankfully, the two defeats speeded up the draining process of negotiations and both camps agreed to their end of the bargain. In the best All-British Heavyweight contest for years, Harrison stopped a bloody Williams in three rounds, earning himself a European Title shot at Michael Sprott in the process.

It was a chance for Harrison to get himself on the world stage. After dominating for two rounds, a lapse of concentration saw Harrison slump to another defeat, via a wicked left hook by Sprott that knocked the Londoner out cold.

With two more pointless victories over, one a highly disputed decision over George Arias which only the referee scored the fight, Harrison met with cab driver Martin Rogan. Rogan had a more realistic dream, and was the more focused of the two. With Audley thinking that he would breeze it, he was overwhelmed by the punch output from the passionate Irishman, and disgraced into a fourth defeat. How can a once-talented southpaw star, fade into a desperate fighter that constantly failed on the vastly shortening stage?

Would the Rogan defeat retire or inspire Audley?

It was the latter to some extent. Audley went onto winning a very competitive Prizefighter field, dominated by the bad-blood between Harrison and Williams.

Nine years on from his amateur stardom, and still a prospect.

So why will Harrison change the face of the sport in 2010? Why should any non-Brit fight fan care if Harrison retires or not? Why bother keep tabs on a fighter once so arrogant and now so desperate?

Harrison blames his defeats on ‘the system.’ This system is the promotions business, mostly in Britain, and the fight game itself. He went on in a recent rant about how he was racially driven out of the country, referring to a similar incident with Amir Khan, who feels he would be a superstar if he was white.

“My race has definitely been an issue, particularly in regards to me being a self-promoter. They didn’t like to see a black man in charge of a company which at one point employed 22 people, as was the case with A-Force Promotions. Just look at Hatton, Calzaghe and De La Hoya. They’ve all set up promotion companies and self-promote too, but have they received half the criticism that I have? No. Why is that? It’s pretty obvious if you ask me.”

“Look at Obama. He is the ultimate message of hope. Will Britain ever have a black prime minister? Never. It will never happen here. Never”

Race is a serious subject that I’m not going to go into detail, but is racism really a serious problem inside ‘the system’? Or is Harrison just playing the race card to earn sympathy and soften up the media?

“Don’t worry, this story will eventually get told. But I want to do it properly. Whitney Houston had a one-hour special with Oprah to discuss in detail here problems and past. I want to do the same, but here in Britain.”

Quotes like ‘This story will eventually get told’ led to a question from a Sky reporter, asking him “So you’re going to write a book? Another money incentive.” Audley’s reaction is what has gripped many British fight fans like myself. His cold stare was something Anthony Hopkins would’ve been proud of during filming of Silence of the Lambs. Tension was running high, and the awkwardness got even worse when Audley refused to give full answers for the rest of the five minute interview.

Part of the story has somewhat leaked out, with Audley the culprit constantly dropping hints in different interviews. “Signing with Frank was the worst mistake of my life, as it went against my morals. Beating Danny gave me another shot at the world title, but to go all the way I felt I needed to be in the system. I knew signing with Frank would open doors that were closed to me.”

When Audley retires, probably after a defeat to Sosnowski, he will release thorough evidence on behalf of black fighters that are racially abused by promoters. He also claims to have enough dirt on corrupt insiders, and maybe, just maybe, has the power to shut down a couple of promotional companies in the process. It could be a messy situation, especially for BBBofC and British Boxing as a whole, who have denied that they are clean. It would bring an end to ‘the system’.

Could Audley save boxing from corruption, organizations and racism? That’s highly unlikely, but it’s a step in the right direction that fighters have the testicular fortitude to release detailed information about these touchy subjects. People need to admire Audley for his bravery, if not his achievements in the professional ring, as Audley has already battled through the death of his brother and a short stint at a young offenders prison to get to where he is now.

Will the boxing world finally listen to Audley Harrison?