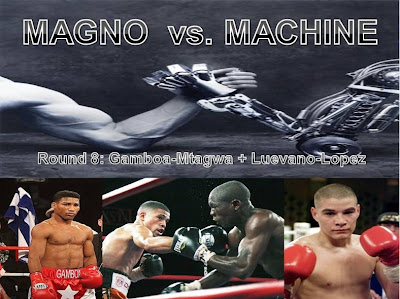 We’re back. After both competitors hibernated over the Christmas period, hopefully both are in top condition; looking to erase those New Year cobwebs with two correct predictions in our first Magno vs. Machine of the decade.

Is Magno beginning to tire over the stretch? Can the Machine bottle up one more shot at defeating The Boxing Tribune’s Editor-in-Chief?

Magno: Gamboa is by far the better fighter of the two, but Mtagwa is tough enough to not get discouraged by the more talented Cuban and wild enough to catch Gamboa in a defensive lapse.

The last time we saw Mtagwa, he nearly stopped Juanma Lopez, so he will be rightfully considered a real live underdog. To make things more interesting, Gamboa is a mega-talented, but defensively vulnerable fighter who has never fought anyone as mentally tough as Mtagwa.

Gamboa will have the advantage early on based on sheer athleticism. Mtagwa will inch closer and closer and make it a battle in the later rounds, but Gamboa will have such a lead by then that a Mtagwa push will mean little.
Gamboa via solid and decisive UD.

Machine: Both fighters can slug, but Gamboa can box; it’s that simple in the machine’s case.
Forget the sloppy defence and the glass jaw, Gamboa will have more than enough to outbox the Tanzanian. His far superior skill set and his amateur pedigree points towards the Cuban, with Mtagwa facing a stepper task than he did against Lopez.

Although this does has a Khan-Prescitt feel to it, the Machine is very confident that Bob Arum’s matchmaking is spot on once more. Gamboa to win by seventh round knockout.

Magno: Lopez is so used to outclassing his opponents that he has begun to take them lightly and he almost paid dearly for it against Mtagwa.

If Lopez takes Luevano lightly, he’ll be in for a very rude awakening. Luevano is a crafty southpaw who has the ability to give a hotshot youngster fits.

I’m betting that Lopez learned a lesson in the Mtagwa fight and comes into this bout serious and focused. If we see Juanma at 100% physically and mentally, he should be able to break down Luevano, who has had problems with aggressive fighters.

Expect some tough moments early on, but all Lopez from the 8th on…Lopez TKO 10 over Luevano

Machine: The machine rates Lopez very highly, maybe too highly, which might give Magno an advantage to level up on the knockout count in the latter half of round 8.

Adding four pounds develops Lopez into a fresher boxer/puncher, but Luevano will have the testicular fortitude to stay with Lopez through 6, bringing back the Mtagwa demons that Lopez will have in the back of his mind.

Here’s where the tide can turn, reminders of Mtagwa’s courageous fightback constantly ring in Lopez’s ears, Luevano sensing his time to shine, Lopez in two minds whether to finish it off or to watch his gas tank.

Luevano wins the next two rounds, before Lopez drastically tires and finishes round 11 on unsteady legs. Lopez survives and bags the final round to win a highly controversial majority decision.