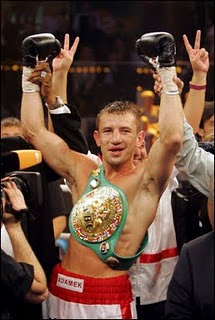 name for even the casual fans. Known for his incredible punch resistance and exciting style, the Pole has built quite a following in his adopted town of New Jersey.

After winning the bronze medal at the 1998 European Amateur Boxing Championships in Minsk, Belarus, losing out to Courtney Fry in the light heavyweight semi-final, Adamek decided to turn pro in 1999.

In four years time, Adamek had notched up 24 wins before the IBF handed him their Intercontinental title after he stopped Ed Dalton in two rounds. The WBO also took notice of ‘Goral’, as he had a connection with the WBO title following a fifth round demolition of Dzhabrail Dzhabrailov.

But it was the WBC who gave Adamek his first title shot. In 2004, Antonio Tarver was stripped of his belt for choosing to fight Glen Johnson rather than Paul Briggs, Adamek’s opponent.

Briggs and Adamek engaged in an all-out brawl as they both looked to win their first professional title. It was a mystery how the bout went the distance, maybe a credit to the fighters’ unreal spirit and determination, as Briggs’ left eye was cut in the second round following a clash of heads, while Adamek’s eye was nearly swollen shut in the third. Adamek also broke his nose later on in the fight.

Adamek got the nod via majority decision, raising calls for an immediate rematch. Adamek decided to defend his belt against Thomas Ulrich, an Olympic bronze medallist, winning with a stunning right hand in the sixth that laid Ulrich out flat on the canvas.

We had to wait a full year t 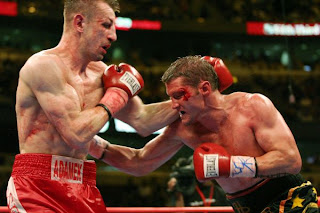 o see Adamek back in the ring, as his hotly awaited rematch with Briggs took place on HBO. Adamek was down for the first time in his career in the opening round, but he got up to successfully defend his WBC title for the second time, again via majority decision. In the post-fight analysis, Jim Lampley said that Adamek-Briggs I and II was the best combined 24 rounds he had ever seen.

His unbeaten run came to an end in his next fight, as he stepped in the ring with Chad Dawson, who’d switched trainers from Dan Birmingham to Floyd Mayweather Sr. especially for Adamek’s style. Adamek struggled early on as the quicker Dawson stayed out of range and using his superior reach advantage to pick the oncoming Pole off. Dawson floored Adamek in the seventh following a left to the body, but it appeared on the replay that Adamek had tripped over Dawson’s foot.

Deflated by his inability to get inside, Adamek found himself back in the fight when he launched a straight right that knocked Dawson down in the tenth. For the next two rounds, it was a game of cat and mouse, as Dawson, comfortably ahead on the scorecards, got on his motor scooter as he attempted to finish the fight on his feet. He did so, and won the WBC title in the process. It’s no disgrace to lose to Dawson, as the American has proved that he’s a star talent, entering pound-4-pound rankings across the boxing media.

Adamek decided that there was nothing left for him at 175 pounds, and it was time to move up north to cruiserweight. Two wins over tomato cans signalled an eliminator against the ever-declining O’Neill Bell. And in some sort of an upset, the smaller Adamek finished off Bell in the eighth after winning the majority of the rounds in his home nation.

His next victim was Gary Gomez in a stay busy fight, before he attempted to become a two-weight world champion with a victory over Steve Cunningham for ‘USS’s IBF title. In a fight of the year contender, Adamek knocked-down Cunningham three times en route to a twelve round split decision. Many felt that Cunningham won despite kissing the canvas three times.

Following two defences of his title, both stoppage wins over Jonathan Banks and Bobby Gunn, Adamek challenged Andrew Golota, the most notable boxing icon to emerge out of Poland. Way past his best, Golota still had an insanely vocal fanbase as they met in the Polish version of ‘Fight of the Century’.

Golota wasn’t in the fight, as the fresher and much faster Adamek stopped him in five uncompetitive rounds. The win marked Adamek’s true credentials at heavyweight, as his main intention is a showdown with a Klitschko.

On Saturday night at his favourite venue Prudential Center, Tomasz Adamek will be one-step closer to challenging for the heavyweight title. He faces Jason Estrada (16-2, 4 KO), an opponent that despite his impressive amateur credentials, has failed to hit his maximum potential in the business.

So Estrada is not there for the paycheque, we’ve figured that out. He’ll be durable, likely take Adamek the full twelve. It’s a disappointment that this fight isn’t on a network, but on internet pay-per-view, as I feel that many fans miss out on a chance to see the two-weight world champion taking another medium step in his legacy.

His exciting style and durability is what the broadcasters want. So why has no-one picked this fight up? There are a lot of Adamek fans out there, many probably will buy the online stream, but surely, they can reward Adamek, who’s been a servant to the sport in central Europe, with a healthy cash injection?

Adamek has fought in no-less than six countries, to widen his market share and to raise awareness of his talents. But still, Adamek is fighting for respect from many proclaimed experts and hardcore fans as a top 20 pound-4-pound candidate, and he’ll take even longer to convince them off TV.