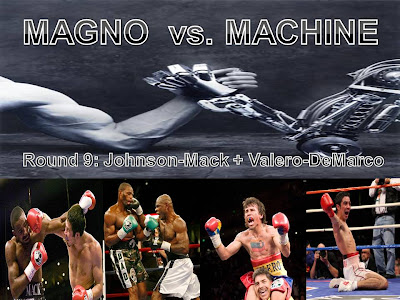 As the late Michael Jackson put it, “This is it.” There has to be a change of strategy; something different from Title Bout’s corner. We’re in round 9 of a scheduled 12, and the Machine is no closer to catching the boxing encyclopedia in human form, Paul Magno.

There’s no interim title at stake here, oh no, this is all about pride, bragging rights and who gets first orders at the bar afterwards. Yes folks, we’re excited, so without further ado, let round 10 commence.

Magno: Johnson’s run has to end sometime and there’s nobody better to push an elder statesman over the cliff than a motivated, hungry contender. Mack doesn’t have the fundamentals that Johnson has and he has a reputation for gassing late, but will “The Road Warrior” have the energy to force the issue?

I see Mack coming out strong and building a lead on the scorecards with Johnson coming on late to tighten things up…too little, too late as Mack takes a tight SD

Machine: This is close. Mack, a hungry warrior that’s yet to win world honours, against the old warhorse, Johnson. There’s a lot at stake here, the true meaning of crossroads fight. Winner gets a shot at the IBF title, currently held by Tavoris Cloud.

IBF have made a very good eliminator, something that’s probably never been done before. The Machine expects a fast start from Mack as he looks to ram home his advantage from the get go. Johnson starts to creep back into the fight, his granite chin and punch resistance holding firm as he walks onto heavy shots, unfazed.

Johnson and Mack go to war, throwing everything in their arsenal and leaving it all in the ring. A fight of the year contender, with ‘The Road Warrior’ Glen Johnson emerging victorious via close unanimous decision by scores of 115-113 all round.

Magno: De Marco is tough and he’ll be fighting in front of his countrymen, but he’s tailor made for Valero. It’ll be a “I hit you, you hit me” encounter and De Marco will simply be outgunned. Expect a thrilling couple of rounds and a brave stance by De Marco, but Valero wins via TKO in the third.


Machine: Another great fight full of contrasts, Valero is a knockout machine that seems unstoppable once he smells his opponent’s blood. DeMarco hasn’t been in the ring with anybody near the calibre that Valero has, which may prove to be his downfall.

The lack of experience against people who punch back, and hard don’t forget, dazes DeMarco to begin with. DeMarco struggles to gauge his distance, and he’s knocked-down in the third as Valero cuts down the ring.

The end is nigh, as DeMarco is down again in the fifth, before Valero closes the show in the sixth-round with a wild left hook.