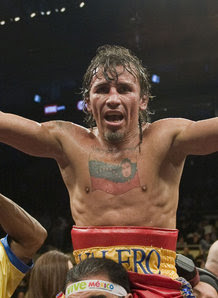 If you like to have a nose around different boxing forums before Saturday’s lightweight bout between Edwin Valero and Antonio DeMarco, you would have seen many people backing the 24 year-old Mexican to pull an upset.

Of course, the majority of The BTBC members plumped for Valero before the first bell, but many could see the logic behind the DeMarco backers. The more technically gifted DeMarco would weather the early wild storm to sneak up on the scorecards, or even halt the Venezuelan titlist.

Let’s say I was aware that DeMarco was a live underdog, but I was quick to say that DeMarco was unprepared for what he had coming, and indeed, he was. From the opening bell until the white flag was waved in DeMarco’s deflated corner, a DeMarco upset was never on the cards. Not even when a tremendously deep cut opened on Valero’s forehead, it only seemed to spur the WBC titleholder to concentrate and work harder. 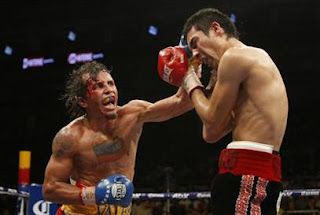 didn’t get going, or simply couldn’t because of Valero’s relentless offense. Valero’s come-forward attitude nullified anything DeMarco had trained in the gym for several weeks prior to the fight taking place in Monterrey. For being too cautious, he was given a pounding.

Every time a reckless fighter blasts away with their chin hanging out waiting to be exposed by a peach of a punch, some people will never be able to resist the temptation of picking the lesser experience, but better equipped fighter. Very similar to the recent Gamboa-Mtagwa fight where some were touting that Gamboa was there for the taking. They were quickly put in their place.

Valero really impressed me yesterday. Not because he won every minute since he was cut, he seemed to adapt well to variable conditions and situations throughout the fight. Antonio DeMarco was a level below Valero and it was apparent from the get go, but I wondered does someone really have what it takes to tame the Venezuelan beast?

To topple Edwin Valero, you need a quick opponents that’s capable to take and trade with ‘Dinamita’. These days, that style is very rare, even more so in the lightweight division.

The Valero doubters criticise his choice of opponents, and a step-up in class will expose the Venezuelan ‘fraud’ to who he really is. Let’s say he decides to step in with Marquez, are you going to tell me that you would pick an aging slow counter-puncher over a fresh and physical operator?

If Marquez isn’t available would Diaz be able to stay with him, would Guzman, would Katsidis? The only fighter at lightweight I would consider picking over Valero is Ali Funeka, only because his style might be the perfect match to defeat Valero.

The lanky and rangy South African has received nice air time by HBO, in a gutsy effort against Nate Campbell and a highly controversial decision against Joan Guzman. On both occasions, Funeka showed that he causes mountains of problems for the best technicians, and Valero, as special as he is, might not be an exception this time.

It’s the fight that intrigues me the most at 135, it’s really the only one that I see lasting over eight rounds. Another option might be Humberto Soto, a face-first fighter that is a fiery fighter that could frustrate Valero for the earlier stages of the fight. Soto helped DeMarco prepare for Valero, and is favourite to face him next. I would think Valero would come through in the end.

Gary Shaw has again mentioned Timothy Bradley’s name, and I would have no problems with that fight either. Bradley is in need of a tough match-up and Valero could be the guy to hand him the tough test that he needs to elevate himself into a HBO product.

Certainly, the future is bright for Valero as he proved last night that he is not all hype. There’s nobody like Edwin Valero. To beat him, it would require someone special. In my view, Valero is destined for domination.