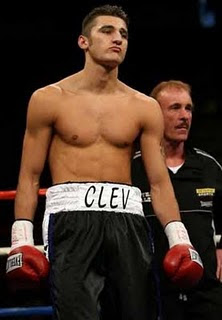 Erislandy Lara got the House Fighter Project off to the best possible start with a tenth-round stoppage victory over the experienced Grady Brewer on January 29. Now it’s Nathan Cleverly and James DeGale’s turn to advance another step in their fledging careers.

Nathan Cleverly (18-0, 8 KO) challenges Antonio Brancalion (32-7-2, 8 KO), an over-the-hill but experienced Italian veteran. Brancalion has been in the rings with name opponents in the past such as Mario Veit and Stipe Drews, losing both by unanimous decision. The fight will be for the vacant European light heavyweight title.

In his last outing, Brancalion stumbled across jail-bound Juergen Braehmer for the same belt that will be on the line on Saturday. The Italian was down three times during the ninety-seven second-long contest. Braehmer went on to capture the vacant WBO light heavyweight title by defeating Dmitry Sukhotsky via unanimous decision, before later being sentenced for assault.

Cleverly, 22, is currently ranked by every alphabet organization, #2 with the WBO, #3 IBF, #5 WBC and #12 by the WBA. He’s expected to challenge for the IBF title later in the year, maybe against Tavoris Cloud, maybe not. Rumours are that Cloud will defend his belt against Glen Johnson, before relinquishing his strap so he can face Chad Dawson instead. However, Cloud needs to get through Johnson first; Cleverly needs to get through Brancalion too.

The fight was scheduled to be held in Italy, but Brancalion demanded that the date was pushed back suggesting problems of making weight. The wily fox Frank Warren claimed ownership of the fight and posted it on the Night of Champions show.

This should be relatively straight forward for Clever Boy, but as we’ve seen in the past, not all prospects make it to the promise land. Take one eye off the ball and the veteran will pocket his chance.

The fight will headline Frank Warren’s Night of Champions, which was a juicy fight card before Kell Brook, Danny Williams and Sam Sexton all pulled out for different reasons. Also on the card, Kevin Mitchell will face blown-up Colombian super featherweight Ignacio Mendoza at 135 pounds and promising unbeaten heavyweight Derek Chisora will square up to the infamous Carl Baker. There are plenty of undefeated prospects on show too, one of which is James DeGale, our super middleweight House Fighter.

DeGale is improving as he gathers more rounds under his belt, and this is visible with the level of competition he’s facing. Of course, the Gold Medallist is very carefully matched by Warren, but he’s not facing eastern European punchbags, at least he’s fighting domestic level, and that’s well respected in Britain.

I expect both House Fighters to win on Saturday, and hopefully they will. Two undefeated fighters at different stages in their careers will hopefully raise our record to 3-0. If you want to catch a glimpse of our House Fighters, tune-in onto the forum Saturday afternoon.