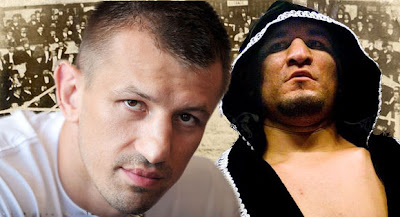 According to nearly every credible source, the rumored Tomasz Adamek-Chris Arreola will cease to be a rumor in a matter of hours.

While this fight won’t be as significant to the heavyweight division as Wladimir Klitschko-Eddie Chambers or, even, David Haye-John Ruiz, it will be the first time in a long time that fans are getting an evenly-matched, entertaining battle between two guys on the verge of being considered legit threats in the heavyweight division.

A good homework assignment would be to try and remember the last time we were treated to something as all-around good as Adamek vs. Arreola.

If you can come up with an answer, by all means post it in the comment section here because, honestly, I’m having a hard time coming up with anything in recent memory.

In any case, both fighters have a lot to lose on April 24th.

For Arreola, a loss represents a deeper hole for his career than the one he found himself in following his one-sided loss to Vitali Klitschko last year. A bad loss officially means journeyman status for the affable Mexican-American brawler.

For Adamek, a loss ends his experiment in the heavyweight division and sends him back to the lower-paying ranks of the cruiserweight division with his tail between his legs. The term “journeyman” at heavyweight could also be applied to an Adamek unable to get past a 260+ pound doorkeeper.

There’s no way around it. This is a crucial fight for both warriors and neither has been one to shy away from a good, old school brawl.

The biggest question in this fight will be: Who the hell will be the betting favorite?

Adamek is the better-skilled and better conditioned of the two. He proudly carries the weight of Polish hopes and dreams on his shoulders and seems to be a better, more inspired fighter than the one who held the 175 lb. crown several years ago.

Arreola is the HBO-friendly fan favorite, really more charisma than substance, but always down for a brawl. Come fight night, Arreola could likely have a forty pound weight advantage aside from a natural edge in power and strength.

Right now, I’d be hard-pressed to give you a real prediction. The fight is that tight.

The only sure winners right now are the fans…and that’s all that really matters.