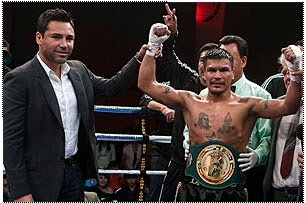 Lots of action South of the border this past Saturday.

Ponce de Leon pounced on Cruz from the opening bell and never let him in the fight until a thudding liver shot ended the bout at the 2:37 mark of the third round. For his part, Cruz never really seemed invested into the fight as he basically ran and pawed with weak shots for the entire bout.

The WBC Latino Featherweight title was at stake.

On the undercard, Argentina’s Lucas Martin Matthysse (26-0, 24 KOs) beat Vivian Harris (29-4-1, 19 KOs) via TKO. Matthysse forced the ref to stop the fight in the fourth round despite battling through a severely swollen right eye. The stoppage did seem a bit premature and Harris complained bitterly, but with Harris’ legs rubbery and Matthysse coming on strong, it seemed just a matter of time before the shopworn former champ would see the canvas.

Tello was stunned several times in the bout, but never stopped throwing back. He even manged to buzz the free-swinging defending champ a couple of times.

In the end, though, Segura’s size and strength advantage won out and the ref was forced to stop the fight in the fourth, when Tello was no longer responding.

Controversy reared its head, though, as the third round seemed to go on beyond the three minute mark and allow for Tello to absorb some brutal, unnecessary punishment . Segura’s biggest and most damaging punches were scored in that extra time and the challenger never managed to recover.

Also, Omar Chavez (20-0, 14 KOs), dropped a bomb on Eugenio Lopez (15-11, 6 KOs) and knocked out the club fighter with a brutal left hand that saw Lopez immediately drop to the canvas.

Despite a couple of surges mid-fight and at the very end, Rojas was in command throughout and cruised to a one-sided unanimous decision (120-108 and 119-109 2x)