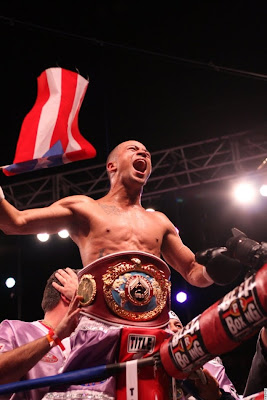 Sonsona had a good 1st round, but folded as soon as Vazquez started applying pressure. The end came thanks to a wicked left hand to the body of Sonsona.

The first two rounds were even and the bout showed signs of being an exciting encounter, but those hopes were dashed in the 3rd round when Romero knocked Mayol out while ref Vic Drakulich was trying to stop the action after a Romero low blow.

A defenseless Mayol, still recoiling from the low blow was knocked down hard and had to be carried out of the ring on a stretcher.

The bout was declared a technical draw and WBC officials announced that an immediate rematch would be ordered.

After an ok 1st round, Holt simply stopped fighting and stopped trying while Mabuza applied even pressure throughout.

Holt did not answer the bell for the 7th. Neither Holt nor his trainer offered any explanation for this extremely passive performance.

Mabuza is now the top challenger for the winner of the upcoming Juan Urango-Devon Alexander bout.

Jones struggled at the beginning, but found his rhythm in the middle rounds and outclassed the experienced Puerto Rican over the full 10.

On that same card, Gabriel Rosado (14-4, 8 KOs) put last August’s slaughter at the hands of Alfredo Angulo behind him by beating tough veteran, Saul Roman (32-6, 27 KOs) via split decision.

Roman started strong, but Rosado’s better technique and execution took over and allowed him to beat the aggressive Mexican.