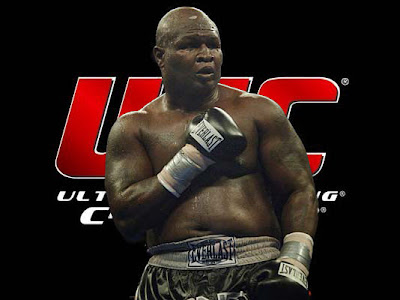 It’s official: James “Lights Out” Toney, one of boxing’s modern day greats, is now a member of the UFC.

Of course, the UFC isn’t getting the James Toney that outclassed most of the best middleweights and super middleweights of his generation. They’re not even getting the post-prime Toney who floored, and ultimately beat, Vassiliy Jirov at cruiserweight or the one who humiliated a shot Evander Holyfield at heavyweight. But, nonetheless, Toney represents the biggest name to ever cross the imaginary border between boxing and mixed martial arts.

Toney’s been looking at a move to the UFC for a few years now, claiming that he just can’t get the big fights in boxing.

Technically, he’s right; But, realistically, he just doesn’t have the juice anymore to beat the top dogs at heavyweight and lacks the draw to entice the young lions to try him out. So, with nowhere to go in the sport and his internal clock ticking away, he’s packed his bags for a try at the UFC octagon and one last power grab at making some real headlines.

So, yeah, we all know and can understand why Toney’s making the jump, but the real question is why Dana White, the UFC’s bossman and “extreme” PT Barnum, has finally decided to give in and receive an active professional boxer into his ranks. After all, this is the same Dana White who rejected a possible Roy Jones-Anderson Silva bout awhile back and has danced around other possible boxing vs. mma bouts.

For White, having James Toney aboard, even a Toney 15 years past his prime, is a win-win situation.

With Toney officially signed to the UFC, the game is now in White’s home court and Toney will have to work under the conditions and whims that his boss dictates. This will not be a case of Toney possibly scoring a win and then heading back to the world of boxing, sporting bragging rights over the UFC; This will be a case of Toney being a full-time employee, pushed into the octagon until someone can put a hurting on “Lights Out.”

This is where the win-win situation for White plays itself out.

If Toney has great success, The UFC still owns him and all of the publicity that goes along with his run. If Toney gets humiliated, White finally has his “UFC is greater than boxing” moment and you can bet that he will milk that for every penny on all subsequent public appearances.

Since The UFC has suffered some ugly defeats recently in head to head PPV battles with boxing, the whole “Boxing is Dead; UFC is the Future” logic has faded and the related Dana White headlines have all but disappeared. What better way to recapture some of that bravado than by taking a future first-ballot hall of fame boxer and having him bloodied and battered at the hands of one of his top guys?

Of course, this second scenario would not be possible if, instead of Toney, we saw a name like Klitschko, Mayweather, or Pacquiao being mentioned in a boxing vs. mma clash.

White has neither the money nor the desire to truly test the boxer vs. mma waters, but, at this point, he certainly has enough “F-You Money” to buy James Toney. Consider this a vanity purchase for Dana White.

For Toney, this is truly a lose-lose proposition.

Once he crosses the line and enters the UFC arena, there’s no going back to boxing. It’s almost like a legit actress deciding to make a porno…there’s no turning back.

At 41 years of age and after nearly a quarter-century in the fight game, it’s doubtful whether Toney can ever have major success again. Considering that he’s struggled in recent contests against questionable talents like Fres Oquendo and Danny Batchelder, it appears that Toney’s career has run its course. But even if Toney does have success in his first UFC bout, does anyone honestly think that Dana White will let him retire gracefully and with the respect he deserves?

Expect James Toney to be an indentured servent to Dana White until one of the UFC thugs can manage to permanently hurt him.

Ideally, Toney would’ve decided to call it a career and dedicate himself to teaching future generations of fighters the skills and technique that made him such a special fighter. Lord knows the sport needs old-school trainers with a keen eye for fundamentals. And, truthfully, there is money to be made in training young champions, especially with the prestige the Toney name brings.

But “Lights Out” appears to have crossed the line and signed a deal with the devil for another 15 minutes of fame.

Maybe we should try to exact a measure of revenge and sign Randy Couture to a boxing match against Vitali Klitschko.

Discuss This At Boxing’s Pound for Pound Best Fan Forum: The BTBC