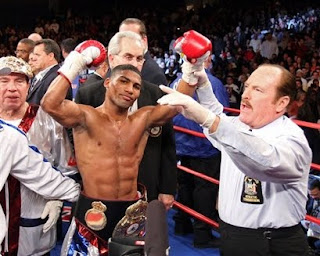 It was obvious from the get go that Gamboa was a class above Barros as he got the Argentinean’s attention with decent counter-punching in the opening exchanges. But the lack of action made an Anthony Small fight watchable, as everybody knew that it was target practice for Gamboa.

The posturing was a sign that Gamboa was in control, but he was coasting until the final 20 seconds of every round, where he would pump a couple of jabs and switch to the body. He would win the round, but only just.

Up ’till the eighth, Barros was puzzled by Gamboa’s athleticism and pure speed as he struggled to mount a consistent offence. Barros finally caught Gamboa with a clean punch, that triggered something in the Cuban brain of his, as he punished him by knocking him down with more relentless pressure than punching force.

As we all came to expect Gamboa to finish things there and then, the Gamboa of old came out of the closet. In the ninth, Barros caught Gamboa flush with a right hook that sent Gamboa’s legs into a funny dance, but he quickly recovered to finish the round on his feet. It made you wonder that if Gamboa had made the same mistake against Celestino Caballero, who he’s fated to face late Summer, that he would be so lucky.

Barros finished well, gunning for the knockout he needed to keep his unblemished record. But Gamboa was content in winning by decision than going reckless again, and Barros won a couple of rounds in the Championship rounds.

The scores were 118-109, 118-109 and 116-111, all in favor of Gamboa. The BTBC scored the fight 118-109 to Gamboa. As mentioned above, his next opponent will likely be Celestino Caballero, who faces Indonesian Daud Yordan in what could be a tricky fight for the freakishly tall Panamanian.

Even though this was Gamboa’s best defensive display by far, there were signs that he’s not as polished as what we thought. I’d still favour him to batter Caballero if they met in the Summer, but the brightest talent in boxing has a few issues he needs to work on in the gym before we can consider him as a finished product.

On the undercard, Juan Carlos Gomez (45-2, 36 KO) made a successful return to the ring with a thrid-round knockout win over Alexey Mazikin (13-5-2, 3 KO). Mazikin went down following a body shot in the first, and again in the third following relentless pressure from the former title challenger.

Steffen Kretschmann (14-2, 13 KO) failed to extract his revenge over Denis Bakhtov (33-5, 22 KO) as they bored the hell out of the Hamburg crowd in a horrible heavyweight fight.

In a bizzare ending, promoter Ahmet Oner jumped onto the apron to call a halt to the proceedings, claiming that Kretschmann wasn’t fit to continue after the German had turned his back from the action. This came in the ninth round after Kretschmann had been down in the sixth following a harmless body shot.

Bakhtov, who scored a first-round knockout win over Kretschmann in the first fight, is no further up the heavyweight ladder after that fight. He did dominate the fight and was looking like he was going to get robbed or disqualified by a pedantic referee. Expect to see Kretschmann playing the role of sacrificial lamb for a heavyweight prospect such as Manuel Charr or Kubrat Pulev and so on.

The released scorecards show that Kretschmann was ridiculously ahead 80-72, 78-73 on two judges scorecards, and this includes a knockodown for Bakhtov against the German. The BTBC had it 76-75 to Bakhtov at the time of the stoppage.