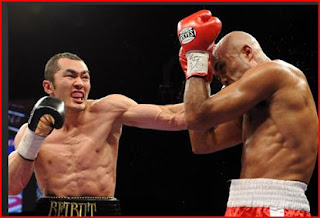 In disappointing news for fans in particular, the WBA have rejected claims from former light heavyweight titlist Gabriel Campillo for a rematch of the highly controversial decision loss to Beibut Shuemnov in January.

In 2009, Campillo outpointed Shumenov in Kazhakstan, also via controversial decision, but Shumenov received the rematch he felt deserved. Campillo wasn’t as fortunate, even though his case was far stronger than his rival.

It’s disappointing news in so many ways. We miss out on the excitement that a trilogy would’ve offered. Campillo has been hard done by, you could argue that it’s some sort of a punishment for the Spaniard. He brings no money to the table, and the risk/reward ratio he offers is terrible.

Most importantly, Shumenov will keep his trinket hostage for months, similar to Felix Sturm, Paulus Moses and other WBA titleholders, who receive kind mandatories from the organization. There’s a reason why Shumenov shouldn’t have that belt around his waist; he’s not that good. Shumenov will defend his crown against official challenger Vyacheslav Uzelkov next, in a fight that I see Uzelkov winning with ease.

This is another blow to an already suffering light heavyweight division, which lacks the depth that has made the division what it is today.