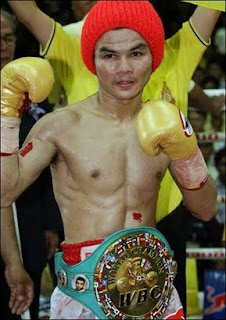 Tokyo, Japan – In a cracking contest, Pongsaklek Wonjongkam (75-3-1, 39 KO) won The Ring magazine’s flyweight championship and regained the WBC flyweight title from the hands of Koki Kameda (22-1, 14 KO) with a competitive majority-decision win in Tokyo.

It was a top drawer back and forth battle, Wonjongkam got the better of the early action, dictating the pace in the opening four rounds. In the fifth, a nasty clash of heads caused both fighters to cut with Kameda getting the worse of it, but it seemed to spring him into action as he began to even things out in the middle rounds.

But the pace gradually caught up with Kameda, and Wonjongkam came on strong to finish with a flurry. The last round summed up the fight, with the momentum switching hands from one boxer to another, but Wonjongkam finishing the stronger of the two. The scores were 116-112, 115-112 in favour of Wonjongkam with a level card 114-114. The BTBC also scored the fight 116-112 in favour of the Thai fighter.

If your a Kameda fan, there’s no need to worry, he was competitive against the most experienced and probably the best flyweight around at the moment. He’s still #2 at 112 pounds, and only 23, he has a fabulous future ahead of him. A rematch with Wonjongkam is highly possible.

For Wonjongkam, he won his 75th professional fight, that’s an amazing achievement. He adds another alphabet trinket to his trophy cabinet, but most importantly, the lineal flyweight championship. Like I’ve seen posted elsewhere, this probably seals Wonjongkam as a hall-of-famer. At 32, he’s just overcome a younger opponent that was heavily tipped to defeat him, so big stock boost for Wonjongkam who looked really good in that ring.

On the undercard, Oleydong Sithsamerchai (34-0, 12 KO) successfully defended his WBC strawweight title with a closer than expected unanimous decision victory over Yasutaka Kuroki (23-4-1, 15 KO), winning by scores of 114-112, 114-113 and 113-112. Sithsamerchai is a major player at 105 pounds, but I don’t expect him to face Roman Gonzalez, Nkosinathi Joyi or Denver Cuello anytime soon.