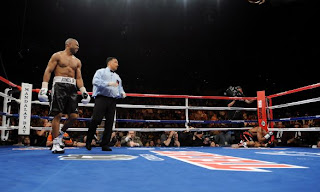 According to BoxingScene, Bernard Hopkins “collapsed to his knees” in his dressing room following his unanimous decision victory over Roy Jones Jr. in Las Vegas.

This reportedly happened in the Executioner’s dressing room as he tried to sit down on a bench because he was feeling tired. Schaefer said that he recovered quickly enough to “reach the ambulance under his own power.”

The report also says that Roy Jones Jr. took a trip to the hospital for treatment following the fight.

This raises questions about older fighters’ safety if both boxers had to go for treatment following a slow-paced fight.

After the fight, Hopkins said “You’re going to think it’s because I got hit on the back of the head too many times, but I want David Haye for the heavyweight championship of the world.” If Hopkins collapsed after going twelve rounds with a shot Roy Jones, who knows what damage Haye could cause to the all-time great if they were to meet-up in the ring?

Richard Schaefer is convinced that Hopkins should hang ’em up and not chase Haye, and I second that.