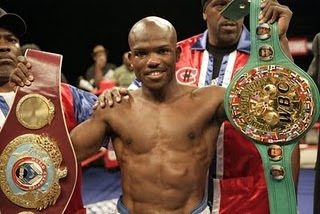 Boxingscene report that a deal between Timothy Bradley and Marcos Maidana has been reached for June 19 on HBO. Bradley will be defending his WBO junior welterweight title while Marcos Maidana probably loses his WBA mandatory status.

Bradley was supposed to make his HBO debut against undefeated welterweight Luis Carlos Abregu, who’s last fight was on the Valero-De Marco undercard. The Maidana fight is much more relevant, one because it’s a 140 pound fight and secondly Abregu is fringe top fifteen contender at welterweight.

You can argue that Maidana is the best value opponent Bradley has faced in his career. Maidana is a bigger name than Holt, Witter and Peterson, even if he isn’t as talent. His power punching style will cause Bradley a little trouble early on maybe, but I expect Bradley to win a wide unanimous decision.

I still see Maidana as a very live underdog. The guy can punch as his record, and 96% knockout percentage suggests. Bradley was down twice against Holt and there’s nothing that shows he’s improved his defense and balance since his unification win.

This is a great fight, a step-up from Abregu, and it’s another great fight added to a pack Spring schedule.